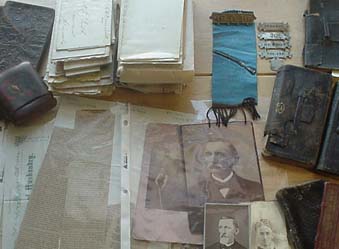 2) seven post-war images of Dr. Chubb and his family

3) large bundle of post-war family correspondence w/letters ranging from the late 1860s into the 20th century, along with news clips and various documents relating to Chubb's property and business activities.

5) Copy of History of the 20th Michigan during the Civil War, which gives various mentions of Chubb. 6) Various documents relating to the 20th Michigan’s Service, copy photos of Chubb and details of Chubb’s life after the War.

Of greatest importance are the Chubb diaries, and especially the 1864 book, which contains a grippingly detailed day-to-day account of life with the 20th Michigan through Grant's Overland Campaign and Siege of Petersburg to the end of the year. Essential to an appreciation of the diary is some knowledge of Surgeon Chubb’s medical and military background, which runs as follows:

At the time he entered the army Orville P. Chubb was a 31 year old practicing physician with a degree from the Cincinnati Medical College. On the he same day he enlisted as a private into Co. "A", 20th Michigan Infantry-[8/9/1862]-he was promoted to Acting Assistant Surgeon. He next advanced to Asst. Surgeon on 5/23/ 1863, and became full Surgeon [w/rank of major] on 7/22/1864. After receiving an appointment as Acting Brigade Surgeon on 4/15/1865, he mustered out of service soon after the Grand Review in late May.