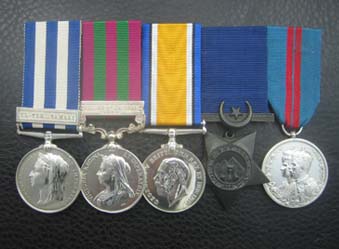 A SCARCE 19TH HUSSARS OFFICERS ‘SUDAN 1884’ GROUP, HIS REGIMENT BEING CONSPICUOUS FOR THEIR GALLANTRY AT THE BATTLE OF EL-TEB IN PARTICULAR. HE LATER SERVED AT THE RELIEF OF CHITRAL, 1895 AND AS A LIEUTENANT-COLONEL, SERVED IN THE GREAT WAR

Ralph Wise Nicholson was commissioned Second Lieutenant in the Kilkenny Militia on 21 February 1880, before transferring to the 19th Hussars with the ranks of Lieutenant on 2 August 1882. With the 19th Hussars, he served in the Sudan Expedition of 1884, his regiment seeing a good deal of hard service. At the battle of El-Teb in particular, the 19th and 10th Hussars were in the thick of action.

Proceeding to India, he transferred to the Bombay Staff Corps on 29 January 1885, was promoted Captain on 2 August 1893, and served with the Chitral Relief Force under Sir Robert Low in 1895. He was promoted Major on 10 July 1901, and was advanced to Lieutenant-Colonel on 2 August 1908. During the Great War he served in the Supply and Transport Corps; entitled to BWM only (MIC confirms). According to his Army List entry:

Note: Medal rolls make it clear he was only entitled to the El-Teb Tamaai clasp to his Egypt and Sudan medal.

Condition VF; light pitting and contact marks to edges of 1 & 2. Naming on I.G.S. is officially reengraved from as few letters of surname onwards; presumable their was a spelling mistake. Sold with an original photograph of Nicholson wearing his Egypt, I.G.S. and Star. Also two original military document from the early 1860’s, relating to Captain A.L. Nicholson, 64th Foot; Father?

A scarce on the market 19th Hussars Officers medal for the 1884 Sudan campaign.