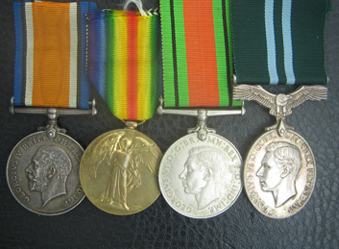 A FINE GREAT WAR 45 SQUADRON, ROYAL FLYING CORPS SOPWITH CAMEL FIGHTER PILOT’S GROUP WHO WAS SHOT DOWN/WOUNDED BY A GERMAN ACE AND TAKEN PRISONER OF WAR IN NOVEMBER 1917 - HIS COMBAT CAREER DESCRIBED IN DETAIL IN AN ARTICLE IN THE CROSS & COCKADE JOURNAL. DURING THE SECOND WAR HE SERVED AS A WING COMMANDER, AUXILIARY AIR FORCE

Roy Godfrey Frith was educated at Whitgift Grammar School and served in the ranks of the South African Scottish for a few months prior to being commissioned Second Lieutenant, General List, for duty in the Royal Flying Corps in May 1917. Having then qualified for his pilot’s certificate, he was posted to No. 45 fighter Squadron on 6 October 1917. 45 Squadron operating Sopwith Camels out of St. Marie Cappel, near Cassel, under Major A. M. Vaucour, M.C. Frirth subsequently participated in 17 offensive sorties, many involving combats with large numbers of enemy aircraft, prior to being downed on his 18th and final on 5 November 1917. All Frith’s flights, which included 3 in one day, were in support of the recently launched Passchendaele offensive. These described in detail in James Brown’s article “Fleeting Fighter” in the Cross & Cockade Journal (Volume 10, No. 3, 1979). This 7 page article about Lieutenant Firth’s short career with 45 Squadron, contains a number of photographs of him whilst with the Squadron and details all of his offensive flights and also noting he was wounded during his final combat.

Frith’s first offensive flight with the squadron was on the 16 October, his first noted combat with enemy Scouts during a patrol flown 2 days later, when dogfights were played out over Moorslede and Becelaere, quickly followed by another combat on the 21 October, with about 20 enemy Scouts near Houthulst, and, on the 22nd, a successful ground-strafing operation against enemy troops and transport, each of the Squadron’s Camels expending around 850 rounds. On 27 October, Frith participated in no less than three operational patrols, all of which produced close encounters and combats with enemy aircraft, with both sides taking losses; so, too, in an attack on an enemy ammunition dump, which was left burning furiously. On 29 October, he was back in action in a dogfight with 16 enemy Scouts and two-seaters over Moorslede, while on 30 October he fought an inconclusive combat with a two-seater in the vicinity of Westroosebeke.

A few days later, on 5 November, Frith’s luck ran out, and he was shot down and taken Prisoner of War while piloting Sopwith Camel B5175 on an observation patrol over Moorslede, on the Ypres Front. Claims were made for a Sopwith Camel in the vicinity and within minutes of each other by two Aces and future Blue Max winners;

2) Leutenant Kurt Wusthoff of Jasta 4, a squadron in Von Richthofen’s ‘Flying Circus’ (Jagdgeschwader I). This his 24th Victory of 27.

Only two Sopwith Camels were shot down this day, another positively claimed by Leutenant of Jasta 27, this combat being fought in a different area. Its quite possible Firth’s Camel was shot down out of control by one of the aces and on recovering was shot down by the other. If this was the case, given timing it would be Baumer then Wusthoff.

Frith survived his wounds and captivity and was placed on the Unemployed List in February 1919. He subsequently joining the Auxiliary Air Force, and was advanced to Flight Lieutenant in July 1938, while serving in No. 903 (County of London) Squadron, a Balloon Section of the A.A.F., and to Squadron Leader in August 1939. Mentioned in Despatches for his services in a Balloon Section during the War (London Gazette 8 June 1944), he was advanced to Wing Commander, and received the Air Efficiency Award in May 1947.