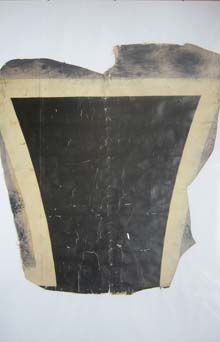 Section of clear doped fabric from the upper wing of a WW1 German aircraft.

The fabric measures 72cm vertically and 68cm horizontally. The fabric features the upper vertical arm of a cross. We can see it’s the upper portion as a rib tape goes vertically almost down the centre. Had it been the lower, due to the positioning of crosses on wings, the bottom section would be missing as this section would be painted on the aileron. The cross itself measures 68cm width, though the fabric has been cut at the left tip, removing 4cm. The length at the vertical is 56cm and a rough calculation of its original size would give a cross of 149cm had all the arms been present.

Rather unusually there are traces of very roughly applied patches of purple paint which appear to be an attempt to camouflage the upper surface; as became standard with aircraft of the later period. The fact that the fabric is clear doped and not coloured, suggests it dates up to 1916 or early 1917 at latest. The style of cross would date from around this time also.

The reverse of the fabric shows evidence of where the rib was stitched to the wing rib and also off to one size where two pieces of fabric were stitched together (this can also be seen on the obverse).

The condition of the fabric is excellent with very little flaking to the paint and the fabric is still relatively supple. The cross size would fit a standard two seater of the period, such as an Albatros CV but there are numerous types it could be. Condition etc suggests a match for the smaller section also offered for sale.

On obtaining this piece, along with the smaller lower wing cross and the Gotha fabric, they were rolled up and have clearly been like this for many years. Indeed a previous owner scribbled a few notes on a sheet of paper (dated March 1985), trying identify what these pieces of fabric were. He notes they were wrapped in paper sent to a family in 1940. There is no information regarding where these pieces came from but they are very much ‘out of the woodwork’ and it seems likely these were the only owners. I have unrolled the fabric and placed in a temporary lightweight frame. However it clearly needs to be professionally mounted.

Both upper and lower crosses can be purchased together at a lower price.