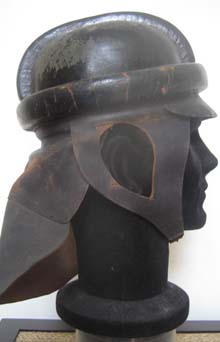 A fine example of a field modified M1913 helmet. Helmet has been repainted at least once during its service life, black being the later colour with traces of green/grey paint underneath. Liner, which is complete and in excellent condition, is Depot stamp "Flg. Bekl. / Doberitz / 1917", thus dating this helmet to 1917.

The helmet has been modified by the original owner, in that both ear cups have been removed from the side flaps by cutting the entire cup areas out (quite roughly); this, one would imagine, was to aid hearing in flight (helmet probably worn over a balaclava or such). Traces of stitching where ear cups were located, show they were or the correct M1913 configuration. Additionally, the original leather neck protection, which remains supple, has been period extended.

Note; Third Reich era NSKK motorcycle helmets, can often be found being sold as WW1 air crew helmets, as the design was based on the M1913 helmet. Their are various versions of this helmet, however, one of the easiest ways to recognise these is the ventilation holes found on either side of the skull of the helmet (various locations) which were not present on any M1913 helmets. It is also possible some M1913 helmets themselves were modified for use by the NSKK, though whether ventilation holes would have been added, is unknown.

Overall condition of helmet is excellent. A most interesting field modified helmet, priced at well under 2/3rds of an unmodified example in as good condition.