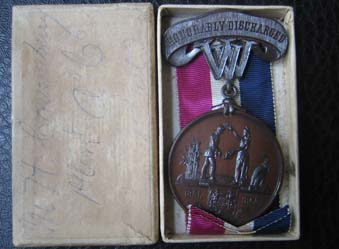 West Virginian was one of the few States that authorised such a medal to Union Army veterans, the medal being based on the British Crimea and Ohio veterans medal. Three different disc/suspension designs were issued, a) Honorably Discharged, b) For Liberty (died of wounds/sickness), c) Killed in Battle. Issued in 1866, in all 26,000 of these medals were minted, although a large amount were never claimed. They were all officially impressed with the soldiers details on the rim, in a similar style to British WW1 medals. These medals are often found minus their suspension.

The 5th West Virginia Infantry was organized at Ceredo during the first half of Sept., 1861, and was mustered in for three years. It is known that it served in West Virginia and Virginia until the expiration of the term of enlistment, the non-veterans being mustered out in Sept., and Oct., 1864, and the veterans and recruits consolidated with the 9th infantry to form the 1st veteran regiment, under Special Orders No. 391, dated Nov, 9, 1864.