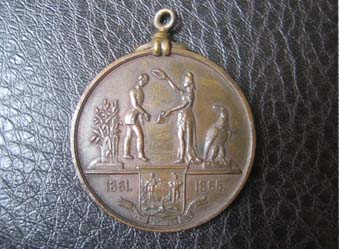 West Virginian was one of the few States that authorised such a medal to Union Army veterans, the medal being based on the British Crimea and Ohio veterans medal. Three different disc/suspension designs were issued, a) Honorably Discharged, b) For Liberty (died of wounds/sickness), c) Killed in Battle. Issued in 1866, in all 26,000 of these medals were minted, although a large amount were never claimed. They were all officially impressed with the soldiers details on the rim, in a similar style to British WW1 medals. These medals are often found minus their suspension.