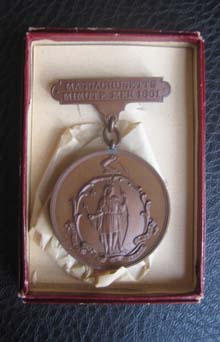 Daniel F Wood, age 33, a painter from Middleboro MA, mustered into Company ‘G’ of the 4th Massachusetts (Militia) Infantry as a Private on 22nd April 1861. He mustered out on 22nd July 1861 after their 3 month service was over. He was Commission 1st Lieutenant on 3rd Sept 1862 and mustered into Company ‘C’ 4th Massachusetts (Militia) Infantry on 23rd Sept 1862 and was mustered out on 25th Sept 1863 a year after his period of service which is odd as his Regiment were only signed on for 9 months service. However a note in his musters sais he was arrested on June 30th 1863 by Order of General Glover. 139 men of this regiment were arrested on this date for refusing to do duty after their term of service had expired. All were released without trial on 7th September 1863 by Special Order 223, Headquarters Department of the Gulf, all finally being mustered out of service on 25th Sept.

The above is certainly something I’ve read happened to some of the men who’s term of service had ended after the Army refused to let them go; especially during this critical time for the Union (the Battle of Gettysburg was fought just days later). However a medal to one of these men, especially an Officer is going to be rare indeed and I’m quite sure this has more research potential

The 4th MA Vol. Militia (3 Month) "Minute Men," had the honour of being the first regiment to leave the State and formed a part of the garrison of Fort Monroe. It took part in the battle of Big Bethel.

The 4th MA Vol. Militia (9 Month) arrived at Baton Rouge, LA on March 7 1863, forming a part of Ingraham's Brigade, Emory's Division, 19th Corps. Here it cooperated with the Navy in the attempt of Admiral Farragut to run past the Port Hudson batteries. It engaged in the attack on Fort Bisland, April 11 to 13, and joined in the pursuit of the Confederates as far as Franklin. From the last of April until the 30th of May it was in or near Brashear City. During the first two weeks in June it participated in the siege of Port Hudson and on June 14 took part in the assault. After the surrender of the city July 8, the 4th Regt. did garrison duty in the defences until the termination of its period of enlistment. However on June 30th 139 men had refused to do duty longer than their 9 month enlistment was over and these men were arrested. The rest of the regiment started for home via Cairo, Ill., on the 4th of August and arrived in Boston on the 17th. It was mustered out at Camp Joe Hooker, August 28. The arrested men were released a month later.

The muster out rolls of the 4th Regiment show that it was present at Brashear City, La., on the occasion of the capture of that place by the Confederates, June 23, 1863, and that it lost a large number of prisoners.

Condition Mint, in box of issue with original tissue packaging. A scarce and unusual Officers medal. With copy service/musters etc On CD.