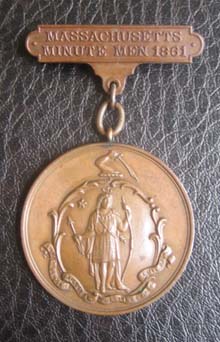 George Mason Lovering was born on January 10, 1832, in Springfield, New Hampshire. His family then moved to East Randolph (now Holbrook Massachusetts), where he would join the local militia unit; The Randolph Light Infantry. This unit that was called into active service at the start of the Civil War on 15th April 1861 as Company ‘D’ of the 4th Massachusetts Infantry. Lovering being mustered into the regiment as First Sergeant in his Company. After their 90 day service, during which they took part in the battle of Big Bethel, the Regiment mustered out on 22nd July 1861.

On 27th December 1861, Lovering mustered into "Read's Company" 3rd Massachusetts Cavalry, a unit that’s companies, acting most of the time independently, were stationed at New Orleans, Baton Rouge, and Plaquemine. Here they performed a considerable amount of outpost duty, suffering some loss. Lovering was discharged for disability on 15th June 1862 at New Orleans.

Not to be deterred from more service, Lovering reenlisted again as 1st Sergeant on the 23rd September 1862 when his old Regiment, the 4th Massachusetts Infantry, was mustered into a further 9 month term of service. On the 27th of December 1862 , the regiment proceeded to New York where it embarked for Louisiana. To form a part of Ingraham's Brigade, Emory's Division, 19th Corps. Here it cooperated with the Navy in the attempt of Admiral Farragut to run past the Port Hudson batteries. It engaged in the attack on Fort Bisland, April 11 to 13, and joined in the pursuit of the Confederates as far as Franklin. On June 14th 1863, the Regiment took part in the Siege of Port Hudson, a Confederate stronghold on the Mississippi River. During this battle Sergeant Lovering’s courage resulted in him being awarded the Congressional Medal of Honor. His citation as follows:

‘For The President of the United States of America, in the name of Congress, takes pleasure in presenting the Medal of Honor to First Sergeant George Mason Lovering, United States Army, for extraordinary heroism on 14 June 1863, while serving with Company I, 4th Massachusetts Infantry, in action at Port Hudson, Louisiana. During a momentary confusion in the ranks caused by other troops rushing upon the regiment, First Sergeant Lovering, with coolness and determination, rendered efficient aid in preventing a panic among the troops.’

Lovering was mustered out again on 28th August 1863, only to be commissioned as a First Lieutenant in Company ‘F’ 3rd Infantry Corps d'Afrique, which would later be renamed the 75th Regiment of US Colored Troops . The regiment participated in the Red River Campaign, then served in the Bayous of Louisiana. Its unclear when Lovering was mustered out, some say in 1865, others that he resigned his Commission several months after receiving it.

Post War, he was a member of Member of GAR Post # 10 and eventually moved to Maine, spending his final years living at a veteran’s home. He died at the age of 87 at St. Mary's Hospital in Lewiston, Maine. He is buried in Union Cemetery in Holbrook.

As with all Medal of Honor recipients, a large amount of information on Lovering can be found online. In 2012, his home towns Randolph and Holbrook erected a monument and memorial bench to Lovering in an area no known as ‘George Mason Lovering Square’

Since Massachusetts Minute Men medals were only issued to a small number of men, their can’t be more than a handful (at most), that were issued to men that would also Awarded the Medal of Honor. Note to US customers; In recent years, the sale or trade of Medal of Honor’s has been made illegal within the United States, which includes the shipping to the United States from other Countries. However, this medal awarded to Lovering, does not fall into that category and as such, this is a rare opportunity to acquire an officially named and awarded medal to a well known Medal of Honor winner.