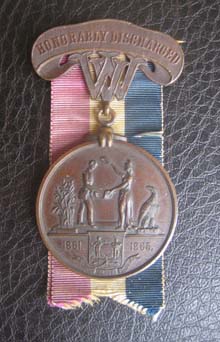 A FASCINATING MEDAL TO A PRIVATE IN CAPTAIN GILMORE’S COMPANY PENNSYLVANIA DRAGOONS. ATTACHED TO THE 1ST LOYAL VIRGINA CAVALRY, THEN THE 2ND WEST VIGINIA CAVALRY. SERVED AS MOUNTED ORDERLY TO A 98TH OHIO INFANTRY COLONEL AND THEN AT HQ OF EX FRENCH CAVALRY OFFICER; BRIG GENERAL DUFFIE

From ‘History of the Second Regiment, West Virginia Cavalry Volunteers’;

Condition VF, Pin to reverse of clasp has been replaced for wear (clip brocken) otherwise NEF.

‘George Washington Gilmore formed a company of cavalry independently at the request of General George B McClellan and Gilmore was its captain. Gilmore's company was originally called the Pennsylvania Dragoons and was formed July 1861 with men from Fayette County Pennsylvania. An example of it fighting detached is the Wytheville Raid, where it fought with an additional company from the 1st West Virginia Cavalry, an infantry regiment, and another cavalry regiment. Beginning July 14, 1863, Gilmore's Company served with the 2nd West Virginia Cavalry, and finished its service as Company L of that regiment’.

Note, Hague’s musters for the 2nd WV are a little confusing regarding the actually designation of Captain Gilmore’s Company from Nov 1861. Whilst his muster sheet is for ‘L’, 2nd WV Cavalry. The actual details say the Company was still designated 1st V Cavalry in 1863 (as above). This is probably due to the independent nature of Gilmore’s company and the fact that West Virginia itself didn’t officially join the Union until 1863 – after this their were various name changes. Several pages of Captain Gilmore’s musters confirm this and are included with the research. In his Jan/Feb Muster, Gilmore puts in an official protest to being officially transfer to the 2nd WV Cavalry!

Has to Samuel Hague himself, from Jan 1863 Hague was detached from his regiment and serving as Orderly to Colonel Van Vorhes of the 92nd Ohio Infantry. Colonel Van Vorhes resigned his commission on 22nd March, however Hague is noted as Orderly service, Brigade Headquarters from July 1863 until February 1864 when he returned to Gilmore’s Company. During this time, the Brigade was under the command of Brigadier General Alfred Napoléon Alexander Duffié, an ex French cavalry Officer who had fought in the Crimean and Austrian Wars. He was mustered out of service in November 1864

A fantastic medal with a great deal of research potential. Sold with copy muster pages and history of the 2nd WV Cavalry on CD.