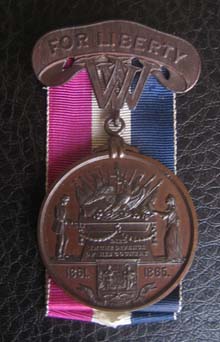 Charles R Perdue, a 41 year old farmer from Franklin, Virginia, enlisted into ‘B’ Company. 5th West Virginia Infantry on 18th October 1861. He Reenlisted as a Veteran on December 23rd 1863. During his service, the 5th WV took part in numerous battles and campaignd, including; the battles of McDowell, Cross Keys, Cedar Mountain, Waterloo Bridge, Gainesville , Groveton, Bull Run, Hunter’s Expedition to Lynchburg and Battle of Kernstown.

The 5th West Virginia took part in Major General Philip H. Sheridan’s Shenandoah Valley Campaign August 6-November 1864. After taking control of Smithfield Summit on August 29, Sheridan marched to Berryville with his 50,000 man Army of the Shenandoah. At the same time Confederate Lt. Gen. Jubal A. Early sent Maj. Gen. Joseph B. Kershaw's division east from Winchester to Berryville. At about 5:00 p.m., Kershaw attacked Colonel Joseph Thoburn's division of the VIII Corps while they were preparing to go into camp. Kershaw routed Thoburn's left flank before the rest of the corps came to the rescue. Darkness ended the fighting, with both sides bringing in heavy reinforcements. The next morning, Early, seeing the strength of the Union's entrenched line, retreated behind Opequon Creek.

At the battle of Berryville on 3rd September 1864, Perdue was severely wounded; gunshot wound in right arm, which was amputated. He died of his wounds at Annapolis on 13th September 1864.

Between Sept and October 1864, non Veterans were discharged and Veterans from the 5th and 9th West Virginia Infantry Regiments were consolidated to form the 1st Veteran Infantry Regiment at the beginning of November 1864. As Perdue died during this time, his medal was issued from the latter Regiment, not the 5th.

Condition near mint, only 3320 ‘For Liberty’ medals struck, the majority of which were for men who died of disease.