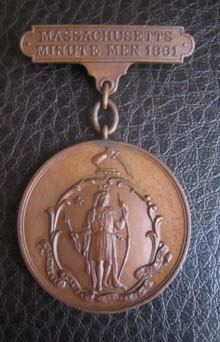 William Peachey age 22 of Marblehead, MA, enlisted on 15th April 1861 and was mustered in Company ‘C’ 8th Massachusetts Infantry on 30th April 1861. He was Mustered Out on 1st August 1861 but on 10th July 1863 he was drafted into Company ‘H’ 9th Massachusetts Infantry. Private Peachy was killed in action on 5th May 1864 at Orange turnpike during the battle of the Wilderness, a battle that saw the Regiment suffer very heavy casualties.

TOf the 21 ‘Irish’ regiments that fought for the Union, the 9th Massachusetts (or Fighting Ninth’) suffered the 3rd highest fatal battle casualties at 209 Officers and men.

Condition EF, a superb and rare KIA medal to one the unions ‘Irish’ regiments.