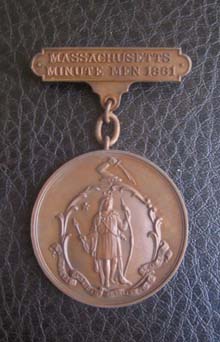 Leonard Alexander age 21 of Brookfield, MA, enlisted on 19th April 1861 and was mustered into Company ‘B’, 3rd Battalion MASSACHUSETTS Rifles. He was Mustered Out on 3rd August 1861 but on 19th August 1861, he mustered into ‘F’ Company, 21st Massachusetts Infantry Regiment as a Sergeant. On 17th June 1864 he was wounded in the leg during the great Union assault on Petersburg. Only a slight wound he returned to his Regiment, only to be killed in action by a gun shot to the head on 29th June 1864 (some sources say 27th).

The 21st MA were involved in many of the hardest fought battles of the War, including Battles of Roanoke Island, Groveton, Bull Run, Chantilly, Antietam, Fredericksburg, "Mud March", Siege of Knoxville, Pursuit of Longstreet, Wilderness (regt down to just 208 men!), Spottsylvania, Assault on the Salient, Cold Harbor and Petersburg to name a few. By the end of its three years of service, the 21st MA had been reduced from 1,000 men to fewer than 100 and Veterans and Recruits transferred to 36th Massachusetts Infantry on October 21st 1864.

Condition EF, a very scarce KIA medal to a man with excellent service.