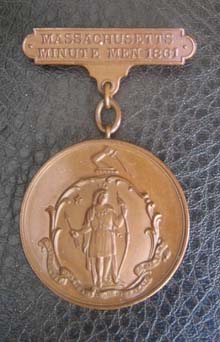 A SCARCE MASSACHUSETTS MINUTEMAN MEDAL TO A SOLDIER OF THE 5TH INFANTRY WHO WOULD HAVE SERVED AT 1ST BULL RUN. LATER WITH THE 10TH LIGHT ARTILLERY HE DIED OF WOUNDS RECEIVED AT THE BATTLE OF REAMS STATION IN AUGUST 1864.

George N. Devereaux, a 20 year-old Sailmaker from Charlestown MA, enlisted as a Private in the FifthRegiment Massachusetts Volunteer Militia on 19th April 1861. Assigned to Company K (The Charlestown City Guards) and was initially stationed for the defence of Washington. The Regiment was one of just three Massachusetts regiments to see action at 1st Bull Run, the first battle of the Civil War. During the battle the regiment the regiment was heavily engaged, loosing 9 killed and 11 wounded and 22 prisoners. Of the 3 Massachusetts regiments at Bull Run, the 5th was the only 3 month Militia unit and as such were the only regiment to receive the Minuteman medal. Devereaux and his regiment was Mustered Out just days after Bull Run on 31st July 1861 at Boston, MA.

Devereaux was severely wounded 25th August 1864 at the battle of Reams' Station, VA and died two days later. An excellent website on the 10th can be found here:
http://www.cwartillery.com/tmba/tenth/10thact.html

Condition NEF, a fine and very scarce medal to an artilleryman battle casualty who saw a great deal of service. Sold with copy musters and books/histories of both units on CD.