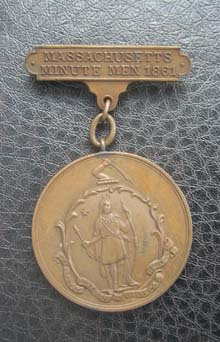 Andrew J. Stetson, a 24 year old Tacker from East Bridgewater, MA, mustered into ‘E’ Company 4th Massachusetts Volunteer Infantry Regiment (Militia) on 6th May 1861. The 4th MA Vol. Mill "Minute Men," had the honour of being the first regiment to leave the State and formed a part of the garrison of Fort Monroe. It took part in the battle of Big Bethel and Stetson was discharged on 22nd July 1861. However on 20th August 1862, he mustered into ‘D’ Company, 38th Massachusetts Volunteer Infantry Regiment as a Corporal. Promoted Sergeant on 1st November 1862, Stetson was wounded at Port Hudson, La. On 27th May 1863. Sergeant Stetson was killed in action at Winchester, Va. On 19th September 1864, and buried near the battlefield. His remains were afterwards brought home and buried in his native town Sumner, Oxford, County, Me.

Condition GVF, sold with copy musters and history of the 38th MA on CD.