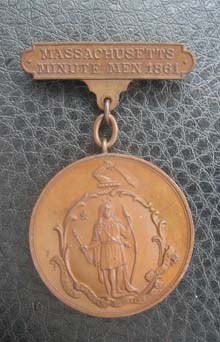 SCARCE 3RD RIFLES MASSACHUSETTS MINUTEMAN MEDAL TO PRIVATE SEVERLEY WOUNDED DURING A RAID BY J.E.B. STUART’S CAVALRY WHILST SERVING WITH THE 19th REGIMENT IN JUNE 1862

William Henry O'Neil, a 19 year old butcher from Boston, enlisted in Co. D, Massachusetts 3rd Rifles Battalion on 19 May 1861. Mustering out of this regiment on 3 August that year, on the 28th of that month, he mustered into Co. K, 19th Massachusetts Infantry. Assigned to Gen. Lander's Brigade, Gen. Stone's Corps of Observation, the Regiment picketed the Potomac during the fall of 1861, advancing to Harrison's Island October 21 and covering the retreat of the troops from Ball's Bluff. The winter of 1861-62 was spent at Muddy Branch guarding the Potomac in front of Darnestown and Rockville. In March, 1862, the regiment, now in Dana's Brigade, Sedgwick's Division, was sent to the Shenandoah, but shortly afterward the entire division was ordered to the Peninsula where it arrived 30 March, and was attached to Sumner's (2d) Corps. It took part in the siege of Yorktown in April, however Private O’Neil was wounded at Whitehouse on 13 June 1862, where he suffered a severe wound in right arm, which was subsequently amputated. Musters stating;
“Loss of arm from gunshot wound received June 13/62 during an attack of cavalry made upon a detachment which was being conveyed by cars from Fair Oaks station to White House Landing, VA”

A further note on his discharge states:
“Was wounded in the raid made by Stuart’s Cavalry June 13th ’62 on the railroad from Fair Oaks Station to White House Landing. Ball entered the upper third of right arm – the limb was amputated near the shoulder on board the hospital transport **? City lying at White House Va, on the evening of the day that his injury was received.”

Early in June 1862, Confederate General, J.E.B. Stuart had sent John Singleton Mosby on a mission to scout along the rear of the Union Armies supply line from White House Landing onto the Pamunkey River. Mosby identified a gap in the Union line that made the supply base at White House Landing a potential target. It was during a raid on this place by Stuart, that O’Neil was wounded. Much can be found in books and online regarding this raid; a good brief summary can be found here: http://www.newkent.net/historystuart.html

After spending the next 8 months recovering at Lexington General Hospital, New York, O’Neil was discharged from service due to disability on 14 March, 1863.

Condition EF. A scarce medal to a soldier who wounded during an early raid by Stuart’s Cavalry, under the newly appointed General Lee. Sold with copy musters on CD.