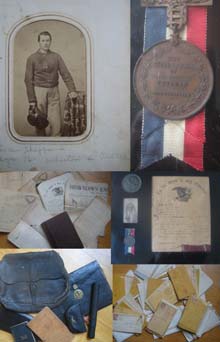 THE EXCEPTIONAL AND COMPLETE MEDAL, DOCUMENT, LETTERS AND MILTARIA GROUP BELONGING TO A SOLDIER OF THE 27TH OHIO VOLUNTEER INFANTRY WHO ENLISTED IN 1861 AGE 15 AND SERVED THROUGHOUT THE WAR, BEING WOUNDED AT THE GREAT BATTLE OF ATLANTA AND ATTAINING THE RANK OF SERGEANT MAJOR BY THE TIME HE WAS 19! IN LATER LIFE HIS WAS AN OHIO STATE SENATOR

1) Civil War Officers leather haversack, named inside ‘Sgt Maj. Oscar Sheppard 27th Infantry’ Good condition, minus removable straps.
2) Civil War period letters pouch/binder; imitation leather/tarred canvas, brass clasp broken.
3) Japanese type celluloid pipe holder with brass and wood pipe, leather pouch with bird clasp which contains bag of what looks like 150 year old tobacco in is paper packet!
4) Leather wallet/billfold, named ‘Oscar Sheppard’ inside. This looks post Civil War
5) Book; an 1844 edition of ‘History of French Revolution’, named inside ‘Oscar Sheppard’ and also ‘confiscated at Tho F. Browns farm on Elk River Tenn’; clearly picked up by Sheappard from a Confederate far whilst on campaign.
6) Small 1862 book of Psalms, this presented to Sheppard’s wife to be in 1863.
7) Leather pocket ledger with numerous names and address of fellow members of the 27th
8) Photograph of a 16 year Oscar Sheppard in a Privates Uniform (same as in frame)
9) CDV photograph of Milton Davis, another young soldier in the 27th Ohio who was a hometown friend of Sheppard’s. The both enlisted and were discharged at the same time and Milton is mentioned many times in Sheppard’s letters
10) An early 1864 regimentally published booklet "Brief record of the Long and tedious marches made by the 27th Ohio Volunteer Infantry" by Thomas Heath; ‘C’ Company 27th Ohio (Sheppard talks about a number of errors the author had in the booklet in one of his letters!) deals with service pre Veteran reenlistment.
11) 31 December 1863 discharge papers (he immediately enlisted as a Veteran)
12) 1 July 1864 promotion to Corporal Certificate; couple of small period repairs
13) 11th Jun 1865 promotion document to Sgt. Maj; has a small hole in it
14) Five sets of orders glued to paper; 29th June 1865 Witness to case against a Pvt., 30 March 1865order to report to headquarters for duty, Apr. 26th 1865 Witness for defence Court Martial, Jul 3rd 1865 three day pass to city, orders to detail 4 men for guard duty and a man of good appearance in front of headquarters (Gen. Sherman coming through)
15) A period newspaper; "Brownlow's Knoxville Whig And Rebel Ventilator", dated August 10 1864.
16) A very large (folded) 1 January 1864 through 9 July 1865 Field and Staff Muster Out Roll. This is the original final handwritten muster roll for Officers and Staff of the 27th Ohio Infantry. Its in remarkably good condition.

1) 10 letters from 1861, 5 with envelopes and couple stamps
2) 20 letters from 1862, 3 envelopes
3) 23 letter from 1863, 17 with envelopes and couple of stamps
4) 20 letters from 1864, 14 envelope a couple of stamps
5) 9 letter from 1865, 3 with envelope and stamps.
6) 15 x 21cm leatherette binder with the entire content of the letters typed out in order. This was done a long time ago, may even have been done by Sheppard or his direct family. What’s really nice about this is its been typed out word for word, including the great number of spelling mistakes. This greatly adds to the reading experience as the spelling mistakes in the main read how he pronounced words and also saves damaging the letters. There are 97 double sided pages so near 200 pages of text! – see pics for example.

The 82 letters tell quite a story, in the main they are written to his father, but there are also ones to his sister. The content of the letters is wide ranging; there are letters about camp life, friends, day to day activities, his views on how things are going and many talking about battles and skirmishes. Sheppard often mentions unit details, commanders etc and as letters are all dated, its easy to follow where he was comparing to regimental service references. He is very graphic at times when it comes to engagements with the rebels, battle casualties etc etc...