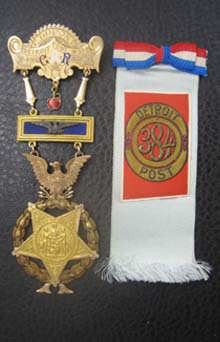 A STUNNING GOLD G.A.R. PRESENTATION BADGE AWARDED TO A VETERAN OF THE 4TH MICHIGAN INFANTRY WHO WAS WOUNDED AT GAINES MILL AND COMMANDED THE 13TH BATTERY MICHIGAN LIGHT ARTILLERY DURING THE 1864 ATTACK ON FORT STEVENS, LATER SERVING AS CAVALRY, THE BATTERY ASSISTED WITH AND CAPTURED TWO OF THE LINCOLN ASSASSINATION CONSPIRATORS

A 2" X 5.2" GOLD AND ENAMEL PRESENTATION BADGE ISSUED BY ‘DETROIT POST 384’ OF THE GRAND ARMY OF THE REPUBLIC. THE TOP HANGER IS ENGRAVED ‘C. DUPONT DETROIT POST 384 GAR’. THE REVERSE OF THE WREATHED STAR ENGRAVED ‘PRESENTED TO PAST COMMANDER CHAS. DUPONT BY DETROIT POST NO. 384 G.A.R. DEPARTMENT OF MICH. JAN. 25TH 1897.’ THE BADGE WEIGHS 46.56 GRAMS AND ALTHOUGH NOT MAKER MARKED, IS VERY FINE QUALITY. SOLD TOGETHER WITH AN ORIGINAL DETROIT POST NO. 384 SATIN RIBBON AND ITS ISSUE ENVELOPE.

Charles Dupont, aged 19, from Detroit, Michigan, enlisted into Company ‘K’, 4th Michigan Infantry on 20 June 1861 at Adrian, Lenawee Co. The regiment took a most honorable part in McClellan's Peninsular Campaign of 1862, having been assigned to Griffin's brigade, Morrell's division of Porter's corps, and was presentat the Siege of Yorktown and fought gallantly at Williamsburg. For the conspicuous position it held in the advance of the army upon the enemy at Newbridge, on the Chickahominy, and the valor displayed under the most trying circumstances it received special notice from General McClellan in his dispatches to the War Department. In this campaign the Fourth sustained its honorable record at Hanover Court House, Mechanicsville, and covered itself with glory at the desperate battle of Gaines' Mill, VA on 27 June 1862. At this latter battle, where Dupont himself was severely wounded, the regiment;

“fought next to the 14th New York on this day. They were defending the left center of the Union Line. The 4th Michigan was supported by the cannons of Battery C 1st Rhode Island Artillery. A. P. Hill sent Anderson’s Brigade consisting of the 14th, 35th, 45th, & 49th Georgia Regiments, and the 3rd Louisiana Battalion against the 4th Michigan’s and 14th New York’s works. The 35th & 45th Georgia attacking on the 4th Michigan’s front. The 4th had fought for over 2 hours repelling three attacks on their front. The 4th had expended all of it’s ammunition. After Anderson’s final assault the 4th was relieved of its position on Union line by Newton’s Brigade the 1st, 2nd & 3rd New Jersey.

Near twilight Stonewall Jackson’s Division arrived on the field advancing into the attack. The 4th Michiganders were again moved into their former position in the Union works. The 4th now fought along side Newton’s Brigade. Trimble’s Brigade attacked with a veracity that none of the prior confederate regiments had shown. The onslaught was too much! Wave after wave of Confederate soldiers attacked. The ammunition of the 5th Corps was exhausted. Many of the Union troops gave ground for want of ammunition. On the 4th Michigan’s left the 4th New Jersey was surrounded and surrendered in mass to Trimble’s advancing Brigade. The 11th Pennsylvania who were fighting next to the 4th New Jersey came under the threat of a flanking movement by the Confederate advance and retired from the field. This forced the 4th Michigan and the rest of Newton’s Brigade to retire across the Chickahominy River to fight another day.” ” During the battle, the regiment lost 88 Officers and men, killed wounded and missing.

Dupont was discharged for disability on 29 July 1862 at Philadelphia, PA. However on 11 December 1863 he was Commissioned 1st Lieutenant (Junior) and on 6 January 1864, joined the 13th Michigan Light Artillery. The 13th Battery was organized at Grand Rapids, and was mustered into service on 20 January 1864. The Battery left Grand Rapids for Washington, D. C., and arrived February 7. Dupont was soon after promoted 1st Lieutenant (Senior) on 3 March 1864, the Battery performing garrison duty in the forts about Washington. Promoted Captain 11 June 1864, in July, Captain Dupont, in charge of the battery, took part in the defence of Fort Stevens when the fort was attacked by the confederate General Early. In September, Dupont is noted in Command at Fort Foote, MD and at Washington DC, taking part in a Court of Inquiry. In February, 1865, the Battery was mounted as Cavalry and did active duty in Maryland in clearing that state of guerrillas. After the assassination of President Lincoln the Battery as cavalry patrolled the roads about Washington and assisted in capturing Harold and Mudd, two of the conspirators. In June the Battery was dismounted and placed in garrison at Fort Reno. It remained here until the 19 June, when it started for Michigan and was paid and disbanded at Jackson 1 July 1865.

An excellent website on the 4th Michigan Infantry can be found here:
https://4thmichigan.wordpress.com/about/

Post War, Dupont was a member of Detroit Post No. 384 Grand Army of the Republic (G.A.R.), serving as Commander in 1896, his Vice Commander at this time was Lieutenant Charles E Foote, who’s own Gold G.A.R. badge is also listed on the Jager Medals website . Captain Dupont died at St. Mary's Hospital, Detroit on 6 December 1901.

A stunning piece, in fantastic condition, awarded to an Officer with a most interesting service during Civil War. Sold with a copy of the 1902 booklet (on CD) ‘Detroit Post No. 384, Grand Army of the Republic’.