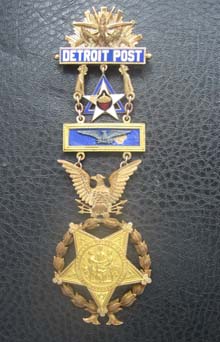 AN EXCEPTIONALLY BEAUTIFUL 14K GOLD G.A.R. PRESENTATION BADGE AWARDED TO A VETERAN OFFICER OF THE 1ST AND 22ND MICHIGAN INFANTRY 1861, HIS REGIMENTS BEING CONSPICUOUS FOR THEIR PARTS AT THE BATTLES OF 1ST BULL RUN AND CHICKAMAUGA WHERE AT THE LATTER THE 22ND LOST 389 OUT OF 455 MEN PRESENT!

A 1.75" X 5.5" 14K GOLD AND ENAMEL PRESENTATION BADGE ISSUED BY THE ‘DETROIT POST’ OF THE GRAND ARMY OF THE REPUBLIC. THE BACK OF THE GOLD STAR IS ENGRAVED: ‘PRESENTED TO PAST COMMANDER CHARLES E. FOOTE BY THE MEMBERS OF DETROIT POST, 384. DEPARTMENT OF MICHIGAN G.A.R. APRIL 14TH 1902.’

SOLD IN ITS ORIGINAL SILK AND VELVET LINED LEATHER HOLDER, STAMPED ‘CHARLES, JEWELER, OF MAIDEN LANE, NEW YORK’ THE HOLDER ALSO CONTAINS TWO DETACHED ‘RECEPTION’ RIBBONS. THE BADGE IS STAMPED 14K IN 3 DIFFERENT PARTS OF THE BADGE AND MAKER STAMPED ‘BRAXMAR N.Y.’ TO THE LOWER REVERSE OF THE WREATH. A WEIGHTY PIECE AT 63.4 GRAMS.

Charles Emery Foote was born at Saline, Washtenaw County, Michigan on May 17, 1842. At the outbreak of the Civil War, on 20 April, 1861 he enlisted at Ypsilanti, Michigan as a Private in Company H (Ypsilanti Light Guard), 1st Michigan Infantry Regiment. Leaving the state on 13 May 13, the 1st Michigan was the first regiment from a western state to reach Washington, where it arrived 16 May 1861. On May 23, 1861, the 1st Michigan, under the leadership of Orlando B. Wilcox, joined with Colonel Ellsworth's 11th New York Regiment to converge upon Alexandria. The two Union forces occupied the city, driving out the small Rebel forces and capturing Robert E. Lee's Arlington estate. Colonel Ellsworth spotted a Confederate flag hanging from an inn called the Marshall House and in the process of removing the flag, the inn's proprietor, James W. Jackson, shot and killed him. Ellsworth was only 24 when he died and was the first Union officer to be killed in the Civil War. The large scale battle of the war was at Bull Run, Va., where the 1st Michigan proved its metal as a fighting regiment and was hotly engaged in that desperate contest, sustaining very heavy casualties. The regiment went into the action 500 Officers and men, loosing a total of 9 Officers and 108 men, killed, wounded, and missing. The regiment returned to the state at the expiration of its three months' term of service and was mustered out at Detroit, 7 August 1861.

On 15 August 15, Foote enlisted as a Sergeant in Company H, 22nd Michigan Infantry Regiment. The 22nd spent the fall and winter of 1862 skirmishing with the Confederate forces and on 1 January 1863, Foote was promoted to First Sergeant. In September 1863, the 22nd was attached to General Gordon Granger’s Reserve Corps in the Army of the Cumberland (Federal), Major General William S. Rosecrans, commanding. On 5 September 1863 they left for Chattanooga, TN where events leading to the battle of Chickamauga were beginning to unfold. First Sergeant Foote was wounded at the battle of Chickamauga, Georgia on 20 September 1863. This was the most significant defeat of the Union Army in the Western theatre and the 22nd Michigan suffered one of the heaviest numbers of casualties of any Union regiment present; 32 Officers and men were killed, 96 Wounded and 261 Missing/captured. A total loss 389 Of the 455 Officers and men who took part in the battle!

“On the afternoon of Sunday, September 20, 1863 orders came for the 22nd MI to move to the front. The regiment formed a line of battle and about 2:30 pm charged up and over Horse Shoe Ridge at the right end of the Federal line. Led by Lt. Colonel William Sanborn the regiment charged right into the thickest of the fight. During the charge Lt. Colonel Sanborn was seriously wounded and 3 of the color bearers lost their lives defending the regimental flag. Meeting stiff resistance, the 22nd MI was forced to retreat to the ridgeline where they regrouped and held their position through an afternoon of continuous combat. At 5:00 pm. they, like most of the surrounding units, were down to their last few rounds of ammunition. By 6:00 pm. the entire Federal line was beginning to unravel as the regiments – out of ammunition, lacking communication, and unable to hold their positions as their flanks were exposed – began pulling back from the ridge. But as they were in the process of retreating the 22nd MI, 21st Ohio, and 89th Ohio were ordered back up the hill to “hold the ground at all hazards” and to ”stand firm and use the cold steel”.

Ammunition and reinforcements were promised, but had not materialized by 7:00 pm. when Confederates made a last desperate charge, surrounding the remaining Federal defenders in the dusk of the evening. With the last of the ammunition gone the 22nd MI, 21st Ohio, and 89th Ohio were forced to surrender.”

"The Twenty-second Michigan, after fighting for nearly three hours, having exhausted their ammunition, boldly charged into the midst of overwhelming numbers with the bayonet, driving them until over come by superior numbers."

Promoted Second Lieutenant on November 10, 1863. Foote continued to serve with the regiment throughout the rest of the War, being promoted to First Lieutenant on 1 April 1865. He mustered out at Nashville, Tennessee on June 26, 1865.

On April 19, 1866 Charles and Catherine La Rue were married at Ypsilanti, Washtenaw County, Michigan. In 1883 Charles was receiving a pension of $4.00 monthly based on the wound to his left hip received at Chickamauga. Dupont was also a member of Detroit Post No. 384 Grand Army of the Republic (G.A.R.). In 1896, Foote served as Vice Commander of this Post, his Commander being Captain Charles Dupont, who’s own Gold G.A.R. badge is also listed on the Jager Medals website. Foote himself served as Commander in 1901.

An exceptionally beautiful piece, awarded to a veteran Officer, who served in two of the most important battles of the Civil War. There is some loss to the blue enamel on the eagle cross-bar and some loss to the white enamel on the acorn Corps drop near the top, though this could be repaired by a skilled jeweler if desired. Sold with a copy of the 1902 booklet (on CD) ‘Detroit Post No. 384, Grand Army of the Republic’.