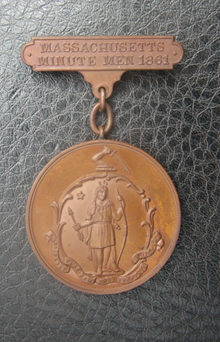 Henry M. Fales a 20 year old butcher from Holden, MA, enlisted in Co. B, Massachusetts 3rd Rifles Battalion on 19 May 1861. Mustering out of this regiment on 3 August, on the 30 September that year, he mustered into Co B of the newly formed 51st Massachusetts Infantry. On 25 November 1862, the regiment proceeding by rail to Boston, where it immediately embarked on the transport Merrimac bound for North Carolina and was assigned to Amory's Brigade. On 11 December, the 51st was assigned to the Goldsboro expedition. On 17 January 1863, seven companies took part in an expedition to Pollocksville, five of them proceeding as far as Young's Cross Roads, and having a skirmish with the enemy at White Oak Creek. In late June, the regiment was assigned to emergency duty until the Confederate army under General Lee should be driven back from Pennsylvania, and it was immediately transferred to Baltimore, Md., where it remained from July 1 to July 6, searching houses for concealed arms, guarding prisoners from Gettysburg, etc. Later joining 1st Corps, Army of the Potomac, the regiment was sent back to Massachusetts in mid July and were mustered out of the service 27 July 1863.

Having mustered out of service with the 51st, on 10 March 1864, Fales mustered into Co G, of the newly formed 57th Massachusetts Infantry, a regiment formed from veteran soldiers with at least 9 months service in other units. Fales was promoted Corporal 20 days later and on 18 April 1864, the regiment started for the seat of war, forming part of Carruth's (1st) Brigade, Stevenson's (1st) Division, Burnside's (9th) Corps. On the 27 April, the corps started for the Rappahannock River and remained in bivouac until the morning of the 6 May; the ears of the men being deafened with the continuous roar of the battle which was already in progress. This battle, known as the Wilderness was fought on 5-6 May 1864, about 15 miles west of Fredericksburg, Virginia and would be one of the bloodiest battles of the war, fought in the most confusing of countryside for troops to fight over. On the morning of the 6th, Stevenson's Division was sent to the support of Hancock's (2d) Corps on the Plank road, and in the bloodbath which followed, of the 550 Officers and men the 57th took into battle, they lost near half their number; 47 killed, 161 wounded, and 43 missing. This was 5th highest number of casualties of any Union regiment present during the battle. Corporal Fales was one of those killed, dying of a gunshot wound.

Condition EF, a superb and scarce KIA medal to an NCO in one the union regiments that suffered the most casualties during one of the most fearful battles of the Civil War. Sold with full musters and a history of the 57th MA on CD