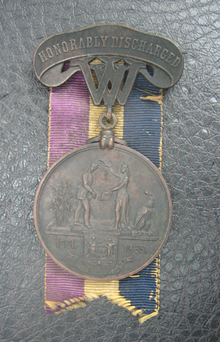 A WEST VIRGINIA CIVIL WAR MEDAL AWARDED TO A PRIVATE WHO WAS WOUNDED AT THE BATTLE OF FISHERS HILL WHEN THE UNION ARMY OF THE SHENANDOAH UNDER MAJOR GENERAL PHILIP SHERIDAN, DEFEATED A CONFEDERATE ARMY UNDER LT GENERAL JUBAL EARLY

George H. Baker, aged 18 from Ohio County, West Virginia, enlisted into Company ‘D’, 9th West Virginia Infantry Regiment on 1 December 1861. He was discharged on 31 December 1863 but reenlisted as a Veteran on 1 January 1864. Musters show he was absent in hospital from 22 May that year but returned to duty on 22 July, however, on 22 September 1864 he was wounded at Fisher Hill, suffering a gunshot wound to the right arm; a ‘conical ball’ is noted as being removed from his arm. On 9 November 1864 Baker transferred to Company ‘D’, 1st West Virginia Veteran Infantry Regiment but did not join the Regiment until leaving hospital in January 1865. He was mustered out of service on 21 July 1865.

From February 1862, the 9th West Virginia Infantry was then assigned to Gen. Milroy's command, with which it remained until May, 1863, when it was ordered to the Kanawha valley. It fought at Cloyd's Mountain and in May, 1864, joined Gen. Crook with whom it took part in the Shenandoah Valley campaign. A list of the battles in which the Regiment took part in includes Cloyd's mountain, New River bridge, Lexington, Lynchburg, Carter's farm, Winchester (2), Martinsburg, Halltown, Berryville, Fisher's hill and Cedar creek.

At the battle of Fishers Hill, fought September 21–22, 1864, the Union Army of the Shenandoah under Major General Philip Sheridan, defeated a Confederate Army under Lt General Jubal Early.

The veterans and recruits of the 9th West Virginia Infantry consolidated with the 5th infantry to form the 1st veteran regiment, under Special Orders No. 391, dated Nov, 9, 1864.

Condition of the medal is excellent. Sold with copy musters (on CD) for his entire service.