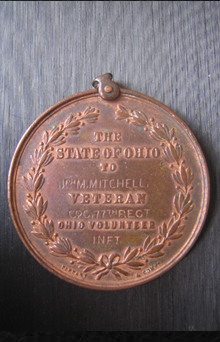 STATE OF OHIO CIVIL WAR VETERAN MEDAL AWARDED TO NCO IN THE 77TH OHIO REGIMENT. CONSPICUOUS FOR THEIR GALLANTRY AT THE BATTLE OF SHILOH THE 77TH LOST OVER HALF ITS STRENGTH IN CASUALTIES OVER THE 3 DAYS BATTLE. TAKEN PRISONER AT MARK’S MILLS IN 1864, HE WAS RELEASED A YEAR LATER AND COMMISSIONED 1ST LIEUTENANT

Joseph M. Mitchell, aged 20 from Monroe County, Ohio, enlisted into ‘C’ company, 77th Ohio Infantry Regiment on 5 October 1861. Promoted Sergeant on 10 December 1861, he served with his regiment at the battle of Shiloh 6-7 April 1862 and the action at Falling Timber the following day, the regiment loosing over half its strength in casualties over the 3 days. At the latter action, elements of the 77th were in action against the famed Confederate cavalry commander, Nathan Bedford Forrest, during which they were in a whisper of capturing Forrest.

Promoted 1st Sergeant on 7 October 1863, on 25 April 1864, Mitchell was captured at the battle of Mark’s Mills, Arkansas, a battle in which the majority of regiment were also taken prisoner. After spending nearly a year in captivity, Mitchell was released and was commissioned 1st Lieutenant in company ‘A’. Lieutenant Mitchell was Mustered Out on 8th March 1866 at Brownsville, Texas

The following biography on Mitchell is taken from ‘Kansas: a cyclopaedia of state history..’:

“Joseph M. Mitchell, was a native of Monroe county, Ohio, where in his earlier years he followed the cooper's trade. He was one of those heroic men who, fifty years ago, promptly responded to the call to arms in defence of the Union. He enlisted in Company E Seventy-seventh Ohio infantry, which regiment was organized at Marietta, Columbus and other places in Ohio, from Sept. 28, 1861, to Jan. 5, 1862, to serve three years. Its first serious battle was that of Shiloh, where it bore a conspicuous part in the determined and protracted struggle for the position at Shiloh Church and in baffling the enemy in all his attempts to capture Taylor's battery, and General Sherman commended the regiment for its heroic defence in this noted battle. Joseph M. Mitchell was captured at the battle of Falling Timber, Ark., and was imprisoned at Tyler, Tex., where he remained until Lee's surrender. He suffered all the horrors incident to prison experience and there contracted diseases which seriously affected him throughout the remainder of his life. After his release at the close of the war he returned to Ohio, where he engaged in the mercantile business, and, there his death occurred in 1906. He was a Democrat in political belief and served as clerk of the district court of Washington county, Ohio, four years. “

This regiment was organized at Marietta, Columbus and other places in Ohio from Sept. 28, 1861, to Jan. 5, 1862, to serve for three years. The original members (except veterans) were mustered out by companies at different dates from Dec. 10, 1864, to Jan. 3, 1865, by reason of expiration of term of service. The organization, composed of veterans and recruits, was consolidated into a battalion of six companies on Jan. 17, 1865, and retained in service until March 8, 1866, when it was mustered out in accordance with orders from the war department.

The following is a list of battles in which this regiment bore an honorable part, as given in the Official Army Register; Shiloh, Falling Timber, siege of Corinth, Little Rock, Okolona, Prairie d'Ane, Marks' mills, Jenkins' ferry, Spanish Fort. So reduced was the regiment by the losses in its first engagement at Shiloh, and by sickness, details and straggling, that it numbered but a little over 200 men, with 13 officers, the loss in the battle and the subsequent affair at Falling Timber being 50 killed, 114 wounded and 56 missing - total, 220. Gen. Sherman commended the conduct of the regiment in its determined and protracted struggle for the position at Shiloh church and in baffling the enemy in all his attempts to capture Taylor's battery. The regiment took part in all the active operations of Sherman's division during the siege of Corinth, constructing field-works, roads and bridges, picketing, skirmishing and fighting, until the division rested beyond Corinth, returning from pursuit of the enemy. From Aug., 1862, until July, 1863, it was in charge of the military prisons at Alton, Ill. A portion of the regiment was captured at Marks' Mills, and those not captured lost at Jenkins' ferry, in killed and wounded, more than half their number. Its strength at time of muster out was 365.

Condition VF, disc only, still retaining suspension clip. Ohio State medals being poorly designed, they are more often than not found as discs due to the thin suspension pin. A good Ohio veterans medal to an NCO and Officer with an excellent service in a very good Regiment.