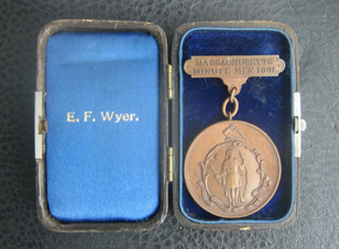 A SCARCE MASSACHUSETTS MINUTEMAN MEDAL TO A SOLDIER OF THE 5TH INFANTRY WHO WOULD HAVE SERVED AT 1ST BULL RUN. LATER COMMISSIONED 1ST LIEUTENANT AND ADJUTANT, POST WAR AS A SENATOR IN THE MASSACHUSETTS STATE LEGISLATURE

Edwin Francis Wyer was born on 28 September 1832, in Cambridge, Middlesex County, Massachusetts. At the outbreak of the Civil War, enlisted as a Private in the Fifth Regiment Massachusetts Volunteer Militia on 13 June 1861. Assigned to Company ‘I’ and was initially stationed for the defence of Washington. The Regiment was one of just three Massachusetts regiments to see action at 1st Bull Run, the first battle of the Civil War. During the battle the regiment the regiment was heavily engaged, loosing 9 killed and 11 wounded and 22 prisoners. Of the 3 Massachusetts regiments at Bull Run, the 5th was the only 3 month Militia unit and as such were the only regiment to receive the Minuteman medal. Devereaux and his regiment was Mustered Out just days after Bull Run on 31st July 1861 at Boston, MA.

Having been promoted 1st Sergeant on 1 September 1862. his Regiment were called out for service again on 16th of that month, Wyer this time being assigned to company ‘E’. During their service, the Regiment participated in the battles of Kinston, Whitehall, and Goldsboro. The Regiment were mustered out of service on 2 July 1863 but were mustered into service for a final time on 27 July 1864. Wyer had by this time been Commissioned 1st Lieutenant in Company ‘G’ and was appointed Adjutant on the 24 August that year. The Regiment mustered out of service for the final time during the Civil War on 16 November 1864. See the following link for more details of the 5th Massachusetts:

After the deactivation of his unit from federal service he remained in it, attaining the rank of captain before retiring to private life in 1872. He served two years as a senator in the Massachusetts State Legislature, being elected in 1891 and again re-elected in 1892. He was also postmaster for the city of Woburn for a total of seventeen years, serving under the administrations of Presidents McKinley, Roosevelt, Taft and the first years of Woodrow Wilson.