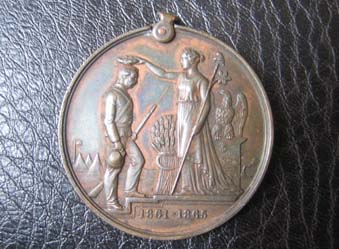 The state of Ohio authorized Tiffany & Company of New York to provide 20,000 medals to recognize those soldiers from Ohio who re-enlisted from the state under War Department General Orders, No. 191, which called for "Veteran Volunteers." These were soldiers who completed their tour of duty and then signed up for further duty as a Veteran Volunteer. The medals were distributed in the summer of 1866 and were officially engraved with the name and unit. The medals were very much based on the British Crimea War medal Today, the conditions of the medals vary greatly but are more often than not found as discs only due to the very poor suspension design.

See write up for Regiment service.

Condition GVF, medal disc only with part suspension. The Regiment suffered severe loss at the battle of Chickamauga.