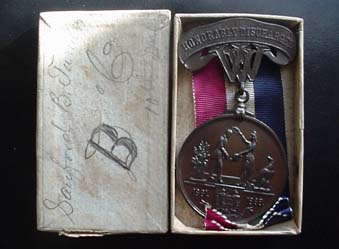 Sanford B Turner 10th West Virginia Infantry Regiment was WIA 19/9/64 at the battle of Opequan Medal in mint condition and contained in named box of issue. Like British Campaign medals, these medals were issued to soldiers who fought for the Union during the Civil War. West Virginian was one of the few States that authorised such a medal to veterans, the medal being based on the British Crimea and Ohio veterans medal. It was issued in 1866.

The medals are impressed with the soldiers details on the rim, in a similar style to British WW1 medals and soldiers details are very easily researched, in fact more information can be obtained as the medals themselves give Company details, not just Regiment. Copies of soldier enlistment, discharge and muster details are kept in the US archives. This example sold with full service musters and pension papers (large amount).