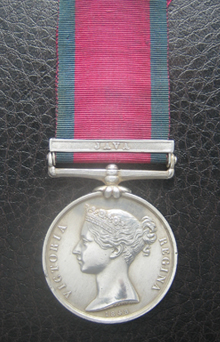 A VERY SCARCE ‘JAVA’ MILITARY GENERAL SERVICE 1793 HEIC OFFICER, ATTACHED TO THE 59TH FOOT, WOUNDED DURING THE ASSUALT ON FORT CORNELIS 1811 WHERE THE 59TH TOOK THE BRUNT OF THE CASUALTIES. ONE OF JUST 12 MGS MEDALS TO THE MADRAS SERVICE. ALSO ENTITLED TO THE ARMY OF INDIA MEDAL CLASP AVA

Colonel Henry George Jourdan, 10th Madras Native Infantry was born in Spitalfields, London on 1st June 1784, his father being a weaver. He joined the Madras service as a Cadet in 1804 and was promoted Lieutenant on 17th July 1805 of the 10th Madras Native Infantry (MNI). Seconded to QMG Department in 1810, he was reported to be survey duty on the Borar Frontier 1809-10, in particular survey marches of the Poona Subsidiary Force through Country unexplored by troops. Rejoining the 10th NI in February 1811, he was selected to take part in the Java expedition. It seems the Imperial Regiments may have been under strength in Officers as five other Madras Officers were attached to British Regiments during the expedition, with Lieutenants Jourdan and Lowe were attached to the 59th Foot.

During the invasion of Java, the 59th Foot, along with the 14th Foot and a battalion of Bengal Volunteers formed part of the Right Brigade under Colonel Gibbs of the 59th. The 59th were conspicuous for their gallantry at the storming of Fort Cornelis, where they assaulted the enemy guns by the point of the bayonet but were attacked by an enemy column advancing on their left flank. The attack was driven off but not before the Regiment took a large number of casualties. Indeed during the battle the 59th Foot suffered a higher number of casualties than any other regiment; 5 Officers 44 OR’s were killed and 11 Officers and 107 OR’s were wounded, including Lieutenants Jourdan and Lowe of the Madras service. Only one of the wounded 59th Officers survived to claim the MGS medal.

It is unknown whether Jourdan was back with the 59th for the Invasion of Palambang, however after the close of hostilities, Jourdan and a number of other particularly qualified Officers were to stay on in Java in various posts; Jourdan being appointed Resident at various locations. In 1813 he is noted as Local Resident at Surakarta, was the first resident at Probolingo in 1814 and is noted in the same position at Passourouang 1815/16. He seems to have been back with his regiment in 1817 and was brought to the favourable notice of the Madras Government for his service in Java, being recommended for advancement.

In 1819 was granted 3 years furlough to England and was promoted Captain 14th May 1821. He took part in the Burma War 1824- 5, his regiment taking part in the Arakan Expedition as part of the 5th Infantry Brigade. The Colonel of the 10th MDI commanded this Brigade and in his absence, Captain Jourdan commanded the regiment during 1825. Of this particularly hard fought campaign its was said;
‘The Arakan was a strange territory and no one had studied the difficulties of warfare in the fever infested jungles, made doubly dangerous by the monsoons, swamps and inundated rice fields checked any advance, while an unseen enemy dealt death from stockade and tree. It was probably the first jungle battle experience for the British and Indian armies.’

Colonel Jourdan died at Westbourne Park on 10th November 1860 aged 77. During his entire service his regiment had been 10th MNI, a regiment that would later become the 10th Gurkha Rifles.

In the absence of locating a detailed biography or record of Service, the above has been pieced together from Army lists, reports etc but clearly needs more detailed research.

A very scarce Military General Service medal, only 46 medal to soldiers of the HEIC the vast majority to Bengal Regiments who supplied a large number of troops. Only 12 medals were issued to the Madras Service (all ranks), the Madras only supplying men on attachment or Staff.