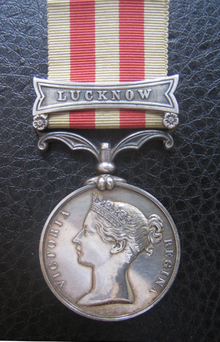 INDIAN MUTINY 1857 TO A MAJOR IN THE GOORKHA FORCE, LATE NIZAM’S ARTILLERY AND ENGINEERS WHO SERVED THROUGHOUT THE LUCKNOW CAMPAIGN

He served with the Nizam’s Artillery, April 1841 to 1853; Adjutant Nizam’s Engineers, April 1853 to May 1857. Served with the Turkish Contingent from 20 March to 20 September, 1855, with local rank of Colonel in Turkey (London Gazette 27 March 1855), in command of the artillery of the Contingent under General Vivien. He resigned on account of the state of his health. Appointed to command 4th Company Nizam’s Artillery, 28 August 1857.

Despatch from Brigadier-General McGregor, Gorruckpore, 7 January 1858: ‘Major Fitzgerald, who accompanied Colonel Lall Singh, has gained the confidence of that officer. He gave him sound and judicious advice, which was well acted on.’