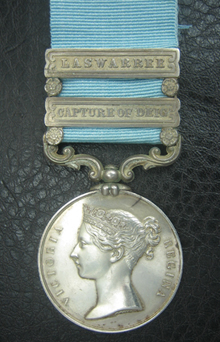 A SUPERB OFFICERS ARMY OF INDIA FOR LASWAREE AND CAPTURE OF DEIG. ONE OF THE STORMING PARTY AT DEIG WHERE HE WAS SEVERELY WOUNDED BY A MARATHA SABRE AT THE BREACH. A FRIEND OF LIEUT JOHN PESTER (3 CLASP MEDAL), HE IS MENTIONED EXTENSIVELY IN PESTER’S BOOK ‘WAR AND SPORT IN INDIA 1802-1806, AN OFFICERS DIARY’ AND WAS BRIGADE MAJOR OF THE 2ND BRIGADE IN LORD LAKE’S ARMY 1803-4

Capt. William Proctor Anderdon, born Bath in 1781, he entered the East India Company (Bengal) Army in as a Cadet 1796, arriving in India 9th Oct 1797.Promoted Lieutenant 10th Sept 1798 he was selected in 1801 the raise and train one of the new Light Infantry Companies, taking part in the operations in Jumma Doab and Sasni.

In 1803 now with the 8th NI, Anderdon served as Brigade Major of Colonel Clarke’s 2nd Brigade of Major General St John’s Left Wing in General Lord Lake’s Grand Army. Serving as such during the first phase of the Hindustan campaign, second Mahratta War.

Anderdon was present at siege and capture of Agra 10-18th October 1803, at one point narrowly escaping and ambush. He also took part in the great battle of Laswarre on 1st November. In what would be one of the most hotly contested battles ever between the British and Indian’s, General Lake’s army took on Scindhia's well supplied and well drilled Veteran Army. During a ferocious battle in which both sides were equally matched and in which both sides suffered very heavy casualties, the British only just prevailed. After the battle Lake would tell how;

‘I was never in so severe a business in my life or anything like this and pray to God I never may be again…these fellows fought like devils or rather like heroes..’

Lake’s Army was reorganised in September 1804 for what would be the second phase of the Hindustan campaign. During this campaign, Anderdon serving as adjutant of the 8th NI, part of Colonel Ball’s 3rd Brigade. The 1/8th took part in the Battle of Deig on 14th November 1804 and although the Regiment was entitled to the clasp, Anderdon did not receive it. He may have been on other duties during the battle or perhaps just didn’t bother applying as the Regiment was in reserve. However he was certainly present during the siege and storming of Deig; 11th – 23rd December 1804. During the storming itself on the 23rd, the 1/8th, along with the flank companies of the 22nd and 76th Foot, formed the main storming column attacking the breach at the heavily defended Shah Burj (King’s Redoubt). On entering the breach Anderdon was cut down by a maratha sabre and dreadfully wounded. Anderdon would have been one of the very first men into the breach as most of the casualties were caused by artillery and gunfire. However the first men into the breech were met Marathas who sabred the attackers and ‘fought like demons’ before retreating on their guns inside the town.

Anderdon is mentioned extensively in Lieut John Pester’s book; ‘War and Sport in India 1802-1806, an Officers Diary’. Pester himself was Brigade Major of the 4th Brigade and ..……………………

Just 30 Laswaree and 36 Capture of Deig clasps were issued to East India Company Officers and Men.

Condition NEF, ‘D’ of surname stamped over ‘S’ at time of naming. One of just two officers medals to the 8th NI for the capture of Deig. Sold with a copy of ‘War and Sport in India..’ on CD. A superb and rare medal with a great deal more research potential.

The outstanding Army of India medal with 3 clasps; Allighur, Battle of Delhi, Capture of Deig, awarded to Anderdon’s friend, Lieutenant John Pester, sold at Spink in 2018 for an incredible £48,000.