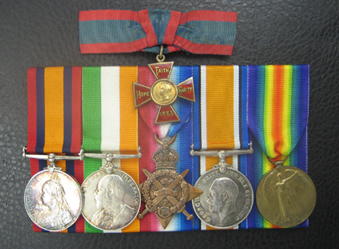 A RARE BOER WAR ROYAL RED CROSS AND GREAT WAR MENTIONED IN DESPATCHES GROUP AWARDED TO A NURSING SISTER WHO SERVED IN SOUTH AFRICA BETWEEN 1899 AND 1902, THE WESTERN FRONT FROM AUGUST 1914, SALONIKA FROM JANUARY 1916 UNTIL MAY 1918 AFTER WHCH SHE WAS POSTED ON HOME SERVICE

Emily Margaret Whiteman was born in Brixworth, Northamptonshire in 1869, and trained as a nurse at St. Bartholomew’s Hospital, Rochester. She enrolled in the Princess Christian’s Army Nursing Service Reserve on 19 March 1897, with the British Journal of Nursing of 14 October 1899 showing her as a member of the Bart’s League. The Journal of a week earlier shows her as a Gold Medallist. Around this time she was working at Princess Christian’s Nursing Home in Windsor.

No. 3 General Hospital sailed for South Africa on 4 November 1899 with Miss Whiteman on the staff, and she served at No. 3 General Hospital at Kroondstat and No. 12 General Hospital at Springfontein in the Boer War. For her services she was awarded the Royal Red Cross. She arrived back in the UK on 9 October 1902, and was invested with the award on 18 December 1902. The British Journal of Nursing shows her as being appointed a ‘Queen’s Nurse’ on 1 July 1903.

Whiteman embarked for France on 12 August 1914, and served during the Great War with No. 6 General Hospital. She returned to the U.K. on 10 November 1915 following a posting to the M.E.F, for Salonika, and sailed from Liverpool for Alexandria on 2 December 1915 and thence to Salonika on 27 January 1916, after a month in Egypt. She served in a variety of Hospitals in Salonika from 1 February 1916 until May 1918 when she returned to the UK. Prior to leaving Salonika, she was given a glowing report; her conduct described as ‘Excellent’, her capabilities; ‘A thoroughly good and very efficient nurse, a good Ward Manager, extremely kind and tactful with patients and a loyal worker’.

After a period of leave, in early August 1918, she was posted to Colchester Military Hospital, requesting to serve with Army of Occupation in June 1919. She served until 31 July 1919, after which she was discharged from military service. For her service is Salonika she was Mentioned in General Milne’s Dispatch (London Gazette 11 June 1918). She resigned on account of age on 19 January 1925, and died in Peterborough in 1953.