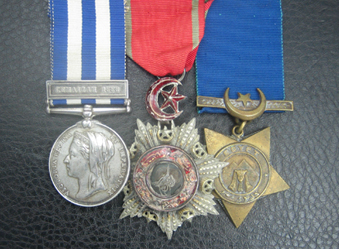 Herbert Roberts Manton was born on 10 June 1866, and was appointed Lieutenant in the 20th Hussars on 30 January 1886. He served in the operations near Suakin in December 1888, including the engagement at Gemaizah (Medal with clasp, 5th class of the Medjidie and Khedive’s Star). He was promoted to Captain on 10 October 1894.

“..was fought between the British/Egyptian troops against Osman Digna's Mahdist tribesmen. It is also called the Battle of Suakin. Digna was attempting to capture the Water Forts, and moved his army towards the port, so Sir Francis Grenfell made a sortie and led the army in a battle at Gemeizeh lasting one and a half hours. The Dervishes lost 1,000 in casualties while Grenfell's men suffered only twelve. During the battle the 20th experienced deficiencies with their armaments. When they charged against Digna's cavalry the slashing and hacking caused three of their swords to break. This was taken up by the press in England and it was brought up in Parliament. Hansard of 21 Dec 1888 had the title, 'Army - The Battle of Suakin - The Broken Swords of the 20th Hussars.' “

Just five officers and 133 other ranks of the 20th Hussars received the clasp for ‘Gemaizah 1888’ but Manton was the only officer to receive it as a single clasp medal; he was also the only 20th Hussars officer to be decorated with the Order of the Medjidie, thus a unique group to the Regiment. The 20th Hussars were the only cavalry Regiment present at the battle.

Condition Egypt pair VF, with very minor pitting from star, Medjidie with much enamel chipped off from wear. Sold with London Gazette announcing award of the Medjidie, copied medal roll extract and full medal roll for the 20th Hussars in Egypt 1884-89. Ex DNW 2001 when it sold for £750 inc premium.