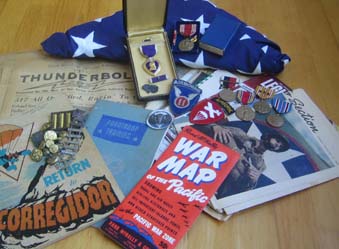 Pte Marshall Boyd Bryden, born 1921, was a member of 'A' company, 1st battalion 503rd parachute infantry Regiment and was wounded during the explosion at Monkey Point, during the battle for Corregidor, Feb 1945. His wounds were not serious enough to prevent him serving during the in the operations in Negros shortly after. A letter to his mother (included in the group) from December 1945 talks of him hoping to be home by Xmas. In a different hand, presumably his mothers, there is a note saying 'M last letter to me before he came home'. Interestingly the letter also asks to 'keep the book Return to Corregidor for me' . This she did and it forms part of the group.

On 16 February 1945, the 503rd Regimental Combat Team jumped on Fortress Corregidor ("the Rock") to liberate that island from occupying Japanese forces. The assault on Corregidor was the most intense combat action in which the 503rd engaged during its existence. Braving intense fire, the paratroopers rushed forward and overcame the heavy blockhouse defences, dropping explosives into embrasures to kill hidden Japanese gunners. For its successful capture of Corregidor, the unit was awarded a Presidential Unit Citation and received its nickname, "the Rock Regiment" from it.

All in all a superb group to a young paratrooper, clearly very proud of his service as so much information was kept. This will form a great basis for in depth research.