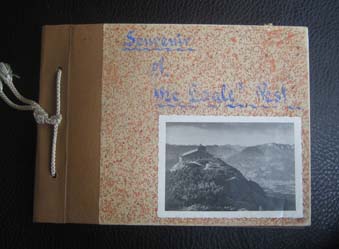 Small 21.cm x 16cm photo album, titled to the front ‘Souvenir of the Eagles Nest’ Album contains 20 photos averaging 11cm x 8cm of Adolf Hitler’s mountain retreat ‘The Eagles Nest’ at Berchtesgaden. Bar one photo glued to the front of the album and a double panoramic view, each photo is on an individual page with description.

The photos themselves are certainly WW2 (they have been black lighted) but the last two have clearly been taken at the close of the War as they are of what the retreat looked like when it was captured by the Allies and have slightly different colouration to the rest. Presumably the photos were found in one of the buildings by an Allied soldier. Many such albums, photos, medals, silverware etc etc were found by soldiers and taken home as souvenirs. The album itself of a design often seen in German soldiers albums so another possibility is it was something put together by an enterprising local resident and sold to an Allied soldier. Text is all in English but its certainly a German style script. Of course this is just guesswork but regardless its an interesting original souvenir from this most infamous of houses!