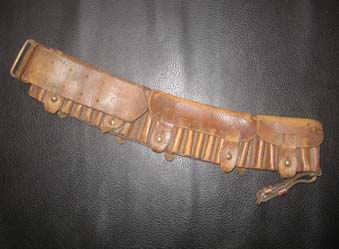 British Boer War 1897 Pattern and 1901 dated and unit marked, mounted troops 303 Calibre Ammunition Leather Bandolier. Made of brown leather it has 6 ammunition carriers with full flap covers. Each carrier has heavy duty hooped, stitched slots for individual .303 rounds used in Lee Metford Service rifles. The bandolier holds 50 individual rounds of ammunition in total and each flap cover has all of its brass stud fasteners. One end of the bandolier is fitted with a heavy duty brass buckle. The mid section of the bandolier has a small metal hoop for strap attachment, complete with the often missing belt attachment strap.

All rivets, studs are present however the stitching on one of the flap attachments is loose and one other is missing – all others secure and the detached flap could be repaired. Bar this there is no damage, the leather is strong and supple.