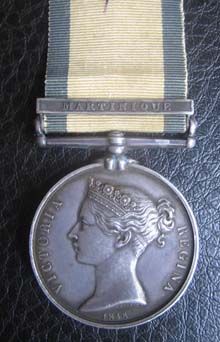 A FANTASTIC NAVAL GENERAL SERVICE MEDAL TO AN OFFICER WITH MUCH BOAT SERVICE DURING THE NAPOLEONIC WARS AND LATER AS A COMMANDER IN THE REVENUE SERVICE AGAINST SMUGGLERS IN IRELAND AND SCOTLAND UP UNTIL 1860!

Commander Edward George Elliott, born Dublin 1796, entered Navy 1808 as a 13 year old Volunteer 1st Class, HMS Forrester. Present at the capture of Martinique (medal and clasp), served in the boats of the Forrester in cutting out a brig and a schooner from the port at Guadeloupe, where at the same time two forts were stormed and taken, and their guns spiked, and the magazine blown up. In Royalist Mr. Elliott contributed to the capture of several French privateers. In one of her boats with only six men, he attacked in open day, drove on shore, and set on fire a gunboat between Dieppe and Treport, under a heavy fire from troops. In the boats of the Dannemark he attacked two sloops defended by three forts and a large body of troops in Quiberon Bay (near St. Nazaire). In 1815 serving in Zenobia, cut out a sloop in the day time from under the fire of two forts in a harbour near Cherbourg. In 1821 he was serving as Chief Mate in Swift revenue cruizer and was for several years employed in suppressing smuggling and was credited with the capture of numerous vessels. He was finally promoted Lieutenant in 1826. In 1834 he and his crew were severely hurt in the protection of a vessel from a large mob. Serving in the Coastguard in 1843 and received the thanks of the Inspector-General of Coastguard in Ireland for services rendered on two occasions to merchant ships in distress, ret. from the Coastguard service with the rank of Commander in 1860, died 1874.

Condition EF, very attractive Patina, sold with detailed memorandum of Service, O’Byrne 1861 entry, a Plus very interesting testimony from Elliot, running for several pages, to the Select Committee on Navy promotion and retirement in 1863. Elliott, then a retired Captain in the Revenue Service, has much to say regarding service and the hardships and unfairness of it and other research.