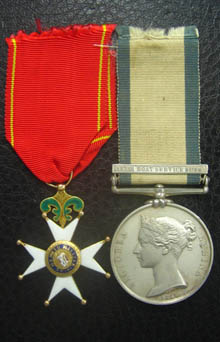 AN OUSTANDING AND UNIQUE 1812 WAR, ROYAL MARINES OFFICER’S NAVAL GENERAL SERVICE 1793 PAIR TO A LIEUTENANT WHO WAS IN CAPTAIN MONTRESOR’S BOAT DURING THE COSTLY BOAT ACTION AGAINST THE AMERICAN GUN-BOATS ON LAKE BORGNE, 14 DECEMBER 1814. THREE WEEKS LATER HE WAS WOUNDED IN THE HEAD BY A MUSKET BALL, DURING THE GALLANT BAYONET CHARGE ON AMERICAN GUNS AT THE BATTLE OF NEW ORLEANS, 8 JANUARY 1815. SHIPWRECKED IN APRIL 1816 AND TAKEN PRISONER BY A SPANISH ROYALIST CORVETTE, BETWEEN 1836-7 HE SERVED WITH THE ROYAL MARINE BATTALION DURING THE CARLIST WAS, TAKING PART IN THE BATTLE OF HERNANI AND AWARDED THE FIRST CLASS SPANISH ORDER OF SAN FERNAND FOR HIS SERVICE

Lieut Morgan took part in the ‘boat action’ before New Orleans which proved a successful but very bloody affair for the British, here he was in the pinnacle with Captain Henry Montresor. He was one of the few RM Officers who took part in the battle of New Orleans on the 8th Jan where Lt Morgan was Wounded in the head during the charge on the enemy guns. Appointed to HMS Tay 13th April on 1816, on 11 Nov 1816 Tay was shipwrecked,off Campeachy, Gulf of Mexico, with 2 million dollars on board. It was reported that a Spanish Royalist corvette attacked the shipwrecked men on Crane's Island and made them prisoner. Spain and Britain were not at War at the time so presumably this could have caused a major International incident. Commanded a Company of RM Battalion during the Carlist War in Spain. They took part in many actions but were conspicuous in their steadfastness at the Battle of Hernani. He was Awarded the First Class Spanish Military Order of San Fernando for his Service in Spain.