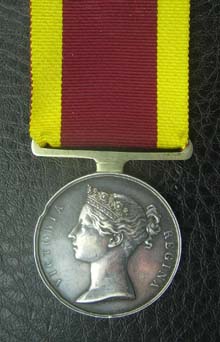 A VERY RARE INDIAN NAVY OFFICERS CHINA 1842 TO A LIEUTENANT, LATER COMMANDER, WHO DURING HIS SERVICE WAS REPUTED TO BE ONE OF THE ABLEST SURVEYORS IN THE INDIAN NAVY

Albany Moore Grieve was born on 21 June 1817 at Llanfair Kilgedin, Monmouthshire and joined the Indian Navy as a Midshipman on 20 May 1831, and served aboard Elphinstone (1833-35), Coote(1835), Palinurus (1837), and Shannon (1838-39). A memorial signed by twenty four officers, including Midshipman Grieve, was sent in February 1838, stating that they agreed to abide by certain changes to service conditions, namely the conversion of the Indian Navy from sailing to steam vessels, and that they would stay in the service despite the stagnation in promotion prospects. Grieve was promoted to Lieutenant in 1841 (seniority date of 11 October 1841) and served in the First China War 1841-2, when it seems he initially served aboard the 6-gun paddle-steamer sloop, Atalanta in 1841. Atalanta was attached, and was mentioned in despatches for his part in the storming of the French fort and line of the batteries in front of Canton on the 26th of May 1841. Atalanta returned to Bombay in August 1841 and it seems likely that Grieve joined the 4-gun steam Sesostris at some point between June and August 1841 as Sesostris on arrived on Station in shortly before Atalanta left. At the capture of Amoy, on the 26th of August 1841, the Sesostris and Queen steamed up to the long battery, consisting of seventy-six guns, on the right of the harbour ; these allowed them to come very near without firing. The first shot was fired at the Sesostris and was followed by eleven others before she returned the compliment; she then, however, kept up a good fire from three of her guns, passed along the whole length of the battery (more than half a mile) till she came opposite the white semicircular battery, behind which the suburbs of the town on this side of the hill commence ; here she remained all alone for more than half-an-hour, firing shot and shell at the battery and into the town in right good style, when she was relieved by the Wellesley and Blenheim. More details of Atalanta and Sesostris service can be found in the books included with this medal.

In late 1845 he did important work when employed as an assistant surveyor on the Arabian Coast whilst aboard Palinurus (1844-50), also producing an unpublished survey, a large scale plan of Masireh Island and Straits in 1846 and in 1848, Grieve was employed in surveying the Somali coast in Africa. Reputed to be one of the ablest surveyors in the Indian Navy, he served in command of Euphrates from 1853 until promoted to Commander on 3 July 1856. Grieve commanded the sailing Sloop-of-War Clive during the Persian War, and was closely involved in the bombardment of Mohammerah on 26 March 1857, when the firing of simultaneous broadsides with Falkland into the opposing batteries ‘drew forth expressions of admiration from nautical spectators aboard the on-looking transports.’ It was later reported that ‘this eminent surveyor and smart officer died suddenly on 17 January 1858.’

Condition VF, couple of small EK’s. Sold with some research, including the books ‘History of the Indian Navy’, ‘Memories of Hydrography’ and ‘Two Years in China’ on CD. Grieve’s IGS medal, clasp Persia, sold at DNW 4 March 2020.