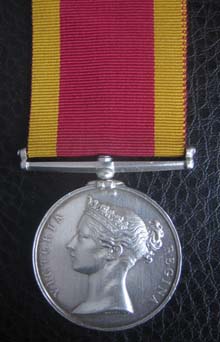 Severely wounded at the head of his company during the gallant attack on the entrenched positions on the heights of Segoan, 16th March, 1842. Whilst with HMS Daedalus, served in Admiral Thomas Cochrane’s anti pirate operations on the Coast of Borneo in 1845- 46, including the boat attack on Malloodoo Bay and with HMS Monarch in the Baltic 1854-5, including blockade of Gulf of Finland (entitled to Baltic medal).