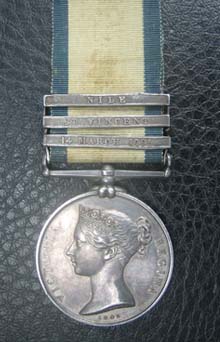 AN OUTSTANDING NGS 1793 AWARDED TO A OFFICER WHO AFTER SERVING AT HOTHAM’S ACTIONS IN 1795 AND THE BATTLE OF CAPE ST VINCENT in 1797, WAS PRESENT AS SIGNAL MIDSHIPMAN AND ADC ABOARD H.M.S. GOLIATH AT NELSON’s GREAT VICTORY AT THE BATTLE OF THE NILE, 1798. ARGUABLY THE MOST IMPORTANT SHIP AT THAT BATTLE. WOUNDED DURING THE LATTER, HE COMMANDED H.M.S. NAUTILUS 1808-14, CAPTURING CAPTURED SIX PRIVATEERS, AND DESTROYED A SEVENTH. DURING HIS SERVICE HE WAS WOUNDED 6 TIMES

Thomas Dench was born circa 1778 and entered the Navy in April 1793, as Midshipman on board the Ardent (64), Captain Robert Manners Sutton. During his service with this ship he served on shore at the occupation of Toulon, and was in warm action with the batteries of St. Fiorenza during the siege of Corsica. In April 1794, when the Ardent took fire and blew up, with all hands on board, this officer had the good fortune to be absent in charge of a prize. Dench’s next appointment was as Midshipman aboard St. George (98), Captain Thomas Foley, this the flag-ship of Sir Hyde Parker. During his service, he took part in Admiral Hotham’s actions of 14 March and 13 July, 1795. At the former, which was also known as the the Battle of Genoa, the British-Neapolitan fleet claimed victory capturing 2 French ships. The ‘14 March 1795’ clasp to the Naval General Service Medal, was awarded for this action. The following May, Captain Foley was appointed to command of Britannia (100), Midshipman Dench following his captain. On 14 February 1797, serving under the flag of Vice-Admiral Charles Thompson, Britannia took part in the battle off Cape St. Vincent. At this battle, the British fleet under Admiral Sir John Jervis, defeated a larger Spanish fleet, capturing 4 ships of the line, the Spanish loosing near 4000 men to the British 300! (St Vincent clasp). Removing again with Captain Foley, to the Goliath (74), he was present, in July following, at the bombardment of Cadiz; and on 1 August 1798, Admiral Nelson’s famous victory at the battle of the Nile. During the battle, Dench served as one of the signal Midshipman and ADC to Captain Foley, leaving and account of the battle in which Goliath played such a pivotal role. Dench was himself wounded by splinter in shoulder when the French three decker L’Orient exploded, sending shock waves across both fleets. A few days after that tremendous conflict, and clearly not disabled by his wound, he is recorded as assisting, as a Volunteer, in cutting out a heavy gun-vessel from under the castle of Aboukir. Although a specific date is not given, it must surely be for the following action that took place on the 25 August……………………………..

…………21 Nile clasps to the crew of Goliath, 6 of which were to Officers. Two Officers medals are known to be extent; Dench’s and Midshipman William Parker’s. Interestingly, Parker’s medal bears the same three clasps, for the same three ships, all commanded by Captain Foley. Looking at the other medals, it seem Captain Foley took a fair number of Officers and men with him when taking command of other ships.

Confirmed as ‘present and entitled’ to clasp for ‘14 March 1795’ in the published rolls. However, Dench is shown as having received the medal with 3 clasps in the Navy List for 1852, thus he had clearly received this medal with all 3 clasps prior to this date. Therefore he either made a slightly later claim, or more likely his claim for this clasp is contained in the missing rolls.

Despite its relatively minor damage to the clasps, this is an outstanding medal to Naval Officer, in particular for his service at the Nile and as a successful ships Commander during the Napoleonic Wars. Provenance: Spink 1930; bought Seaby, November 1971.