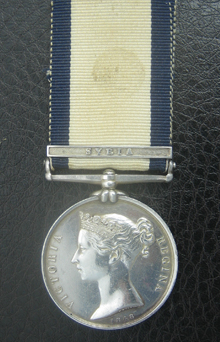 First name additionally and unofficially engraved in a contemporary style.

The medal rolls show six ‘John Stephens’, including four for Syria but no ‘James John Stephens’ is listed. ‘JAMES’ is engraved in a contemporary style but not similar to the officially impressed naming so it’s very doubtful it was done to deceive. More likely, one of the recipients went by his second name ‘John’. If service records can be found for a ‘James John Stephens’ who served in one of the clasp actions/ship that one of the six medal applicant, its very likely this will be the man.