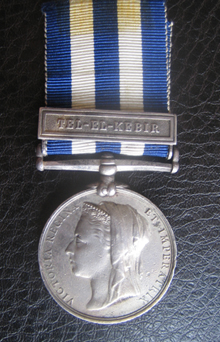 "the Royal Marines advanced without firing a shot up to within 100 yards of the parapet. The Marines seized and held the parapet, but the enemy stubbornly kept their ground in a formed body, 50 feet distant" Major-General Graham reported, "The steadiness of the advance of the 2nd.Brigade, (2nd.Bn. Royal Irish Regiment, Royal Marine Light Infantry; 2nd.Bn. York & Lancashire Regiment and 1st.Bn. Royal Irish Fusiliers), under what appeared to be an utterly overwhelming fire of musketry and artillery will remain a proud remembrance."

The Royal Marines casualties were 2 Officers and 3 men killed, 1 Officer and 52 wounded and a further 21 posted missing. A higher number of casualties than even any of the Highland Brigade regiments that suffered so severely.

Burbage is also entitled to the South Africa 1877-9 Medal, without clasp, for service in H.M.S. Orontes . Casualty rolls misspelt ‘Burbridge’, both medal rolls ‘Burbage’, clearly the same man as no other man with similar spelling of surname.