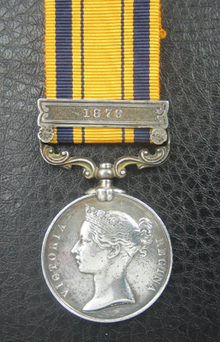 Alfred Francis was born on 1st September 1851 in Sutton, Wiltshire, and having worked as a Labourer, then enlisted into the Royal Marines at Salisbury on 1st September 1870, joining as a Private (No.201) the Portsmouth Division. On completion of his training, he was posted to the 66th Company, and first saw service afloat aboard the sloop Reindeer from August 1871 through to July 1875. During this period Reindeer departed for the Pacific via Madeira and Rio de Janeiro in August 1871, and then sailed for the Falkland Islands, where she arrived in Port Louis, and the following day in Port Stanley, before departing for Valparaiso via the Straits of Magellan in November. She then rounded Cape Horn, and sailed for Callao in Peru.

She was there when on the 22nd July 1872 bloody revolution broke out in Peru, which involved protection of the British residents at Callao. This was followed by a passage to Mazatlan, Mexico, calling at the Galapagos Islands en route. Further local difficulties were experienced on the coast of Mexico. In March 1873 Reindeer departed for La-Libertad, the seaport of San Salvador, following reports of an earthquake in that area, and in April of that year she arrived Panama from Fonseca Bay. At the end of that month, she departed Panama and touched once more at the Galapagos Islands, en route for Esquimalt, Vancouver Island, arriving 22nd June. Reindeer was commanded by Commander William Robert Kennedy up to June 1874, when Commander Charles Vernon Anson assumed command of her, and remained as such till she was paid off at Chatham at the end of 1875.

It was whilst Francis was in the Pacific that he transferred to the old frigate Nereus on 12th July 1875, which was the store and coal ship for the Royal Navy and located at Coquimo. As such he was still in the Pacific when he transferred to the frigate Shah on 17th November 1878. At this stage he joined her owing to the fact she was ordered home, however during her voyage home Shah was diverted to South Africa to assist in the Anglo-Zulu War, after having called at Saint Helena, her crew learnt of the defeat at Isandlwhana. She took on board 200 troops provided by the island’s Governor, and sailed for the Cape Colony. On 7th March 1879 she disembarked 16 officers and 378 men at Durban, one of whom was Francis, and this force was then led by Commander John Brackenbury.

On 18th March 1879, the Naval Brigade with the force heading to relieve Eshowe fought at the Battle of Gingindhlovo on 2nd April where the Royal Navy and their guns held the corners of the British square. After the relief of Eshowe on 4th April, Commander (Acting Captain) Campbell was placed in command of the whole Naval Brigade numbering over 800 officers, seamen and marines. With much of the fighting already over, the detachment from HMS Tenedos re-embarked on 8th May. HMS Active's and HMS Shah's contingents re-embarked on 21st July. The men of the Boadicea were the last company of the Naval Brigade to return to their ship, doing so on 31st July 1879. For his part, Francis is shown as having being sent aboard the troopship Orontes on 6th June 1879, whilst the operations were still ongoing, he having contracted dysentery during the campaign.

On returning to England, Francis is shown as having been posted back to the Portsmouth Division on 11th June 1879, whilst he was traveling aboard the Orontes. His next seagoing appointment was aboard the frigate Inconstant from September 1880 to November 1882. During this period, he saw service in the Mediterranean, and was present during the Egyptian War in 1882, for which he is entitled to the Egypt Medal 1882-1889 without clasp, and the Khedive’s Star dated 1882.

Francis saw service with the Portsmouth dockyard guard ship Asia between August 1883 and October 1885, and his last seagoing appointment was with the battleship Dreadnought between May 1886 and September 1894, during which period he was continuously employed on the Mediterranean Station. During this period, the future King George V, saw service aboard her as an officer between 1886 and 1888. Francis was discharged from service on 8th September 1894. Despite having mostly ‘very good’ or ‘exemplary’ service, there is no evidence to suggest he was awarded the Royal Navy Long Service and Good Conduct Medal.

Condition NVF contact wear and some scratches. A relatively scarce SA 1879 awarded to a Royal Marine.