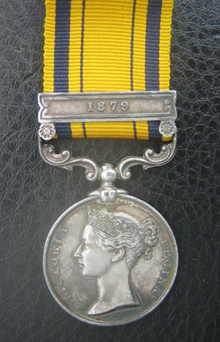 A SCARCE SOUTH AFRICA TO AN A.B. OF H.M.S. "TENEDOS" THE LOWEST NUMBER OF CLASPED MEDALS TO ANY SHIP WITH JUST 57 ISSUED

Alfred Aitkin Evans was born in Birkenhead in 1859 and joined H.M.S. Tenedos as a ‘Boy’ in March 1878. Advanced to Ordinary Seaman in September that year, he was promoted Able Seaman a month later. He served in the Zulu War of 1879, he service record noting he service with H.M.S. Active and Boadicea between 8 February and 9 May 1879 before returning to the Tenedos. The former was pretty much the entire period the Brigade from was ashore and it may well be the Brigade from Tenedos were mustered with the larger contingents. Joining H.M.S. Royal Adelaide on 20 December that years, he would serve in numerous ships between then and 27 October 1888, when he was finally discharged from the Royal Navy. He additionally served with H.M.S. Thalia during the Egyptian campaign of 1882 (Medal and Star).

With the Naval Brigade, Evans would have been present at the battle of Ginginhlovo on 2 April 1879. Here the officers and ratings of the Naval Brigade manned, two deep, the waist-high rampart behind the shelter trench in Lord Chelmsford's laager, with rocket and Gatling gun detachments posted in the corners. Low's The Great Battles of the British Navy takes up the story:

'In this engagement, which consisted of a gallant attempt by the Zulus to capture the laager in which our troops entrenched themselves on the previous night, a detachment of seaman and marines took a prominent part. The British force consisted of 2,500 Natives and 3,400 Europeans, including the 57th, 3rd Battalion 60th, 91st and some companies of the Buffs and 99th Regiment, and a Naval Brigade drawn from H.M.S. Shah, Tenedos and Boadicea - with 2 guns, 2 Gatlings and 2 rocket-tubes, the seamen being led by Commander Brackenbury, and the Marines by Captain Phillips, both of the Shah. The Naval Brigade, with the guns, defended the four angles of the laager, and though the Zulu army, about 12,000 strong, under Dabulamanzi, attacked with their accustomed intrepidity, the fire from the guns and Martini-Henrys was so deadly that they were beaten back and dispersed with a loss of 1,200 men, 470 dead Zulus being buried close to the laager. In this action the British loss was 1 officer and 3 men killed, and 5 officers, including Lieutenant Milne, R.N., and 25 men, including 6 of the Naval Brigade, wounded.'