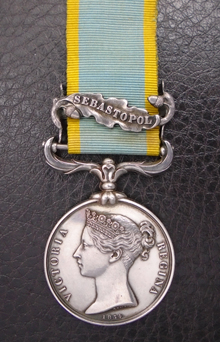 AN EXTREMELY RARE CRIMEA 1854 MEDAL AWARDED TO THE FIRST LIEUTENANT OF THE FLAGSHIP, H.M.S. BRITANNIA WHO WAS THE FIRST OFFICER OF THE NAVAL BRIGADE TO BE KILLED DURING THE CRIMEAN WAR WHEN KILLED IN THE TRENCHES BEFORE SEBASTOPOL ON 20 OCTOBER 1854. HE WAS ONE OF 8 NAVAL BRIGADE OFFICERS KILLED OR DIED OF WOUNDS DURING THE WAR

George Herbert Harris Greathed was born in 1821 and entered the Royal Navy in 1832. He passed his examination on 16 May 1840, and served as Mate on the Mediterranean and Home Stations, in the Indus, Queen, Formidable, and St. Vincent. He obtained his commission on 7 February 1846 and then served in the Mediterranean in H.M.S. Harlequin. Appointed First Lieutenant in H.M.S. Britannia, Flag ship of Vice-Admiral James Whitley Deans Dundas, C.B in the Crimea.

Greathred served on shore in command Britannia’s contingent of the Naval Brigade, under overall command of Captain’s Lushington and Peel, which landed on the 1 October 1854. The naval guns were then hauled to Sebastopol, which in itself was a mammoth task, fifty men being required to haul each gun. Once in position, the bombardment of Sebastopol started on 17 October 1854. On 20 October 1854, Lieutenant Greathed was killed in the trenches before Sebastopol, whilst in the process of laying (aiming) a 68 pounder gun. He lived but 30 minutes after receiving a terrible wound that carried away a great part of his side…….

……Lieutenant Greathed was the first officer of the naval brigade to be killed during the Crimean war, Lieutenant Ruthren dying of wounds two days later. He was one of 8 naval brigade officers killed or died of wounds, during the war (7 killed, 1 died of wounds). Between 17 and 22 October 1854, the Naval Brigade suffered casualties of 18 Officers and men killed, 69 wounded.

Greathed’s medal was officially engraved by Hunt & Roskell as would be expected for a Royal Navy casualty medal issued at this time (between mid November 1855 and the beginning of January 1856) ; Greathed’s medal noted on the roll as sent 26 November 1855. Interestingly, on page 73 of the outstanding work, ‘By Order Of Her Majesty The Crimea Medal’ are photographs of the naming of a medal to Edward Hyson, which appears to have been engraved by the very same engraver at Hunt & Roskell. Hyson’s medal was sent just 9 days before Greathed’s, on 17 November 1855. Medal has a minor correction to ‘THE’ of surname, presumably the engraver correcting the spelling from ‘Greathead’, which is a different spelling of that surname.

As the Sebastopol clasp was not authorised until October 1855, this was sent separately, thus not affixed to the medal. This exactly as expected. According to his roll entry, Greathed’s clasp was sent on 8 February 1859.

Condition EF. An extremely fine and rare officially named medal to an Officer of the Naval Brigade. Sold with copy rolls, various obituary’s, ‘An account of the artillery operations conducted by the Royal artillery and Royal naval brigade before Sebastopol in 1854 and 1855.’ by W.E.M. Reilly and other research on CD.