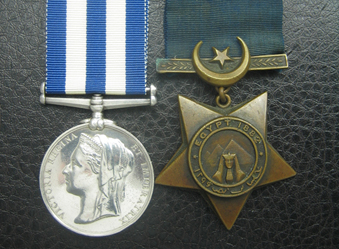 Sydney Prower a labourer from Knowle St Giles, Somerset, joined the Royal Navy on 12 September 1876 as a Boy 2nd Class. Briefly serving aboard H.M.S. Impregnable, he joined Implacable on 21 October that year, serving with this ship until 30 September 1878. Serving with Royal Adelaide and Agincourt as an Ordinary Seaman between the latter date and 26 July 1882, he joined Thalia on 27 July and took part in the Egyptian campaign (medal and Star). Joining Tourmaline on 7 October 1882 and London on 6 December 1883, he was discharged on 24 February 1884.