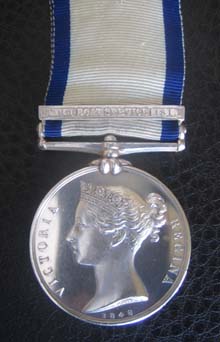 A SUPERB NAVAL GENERAL SERVICE 1793 WITH THE RARE AMERICAN 1812 WAR CLASP “AP & MAY BOAT SERVICE 1813” FOR THE EXPEDITIONS UP THE RIVERS OF CHESAPEAKE BAY AND THE RAID ON HAVRE- DE-GRACE. ALMOST CERTAINLY TOOK PART IN THE BATTLES OF CRANEY ISLAND, HAMPTON ROADS AND QUEENSTOWN IN ADDITION TO NUMEROUS RAIDS

Samuel Handall aged 21 from Taunton Dean, joined the Royal Marines on 1st January 1807, being attached to the Woolwich Division. He joined HMS Marlborough on 18th August 1807 and serving on this ship until January 1814. On 16th February 1814 he joined HMS Dannemark, serving aboard until 10th January 1815. He was discharged as an invalid on 10th February 1815.

HMS Marlborough was the Flagship of Rear Admiral Sir George Cockburn during the ships service in North America, February until November 1813.

‘In April 1813, Rear-Admiral Sir George Cockburn resolved, with a small squadron of boats, to endeavour to cut off the supplies of the Americans and to destroy their stores and public works, situated on the rivers at the head of Chesapeake Bay. On the evening of 28 April, having with him the brigs Fantome and Mohawk, with the Dolphin, Racer and Highflyer tenders, he anchored in the entrance of the Elk river, and with the boats of this small squadron, and those of his flagship, the Marlborough 74, and of the Maidstone, Dragon and Statira frigates, proceeded up the river to destroy some military stores at French Town. In the boats were one hundred and fifty marines and five artillerymen. The next morning the boats arrived within gunshot of French Town, and were fired on by a six-gun battery. The marines were landed and the American militia abandoned the battery and fled into the nearby woods. The guns of the battery were disabled and a large quantity of stores together with five vessels lying in the river were destroyed, but private property was not molested.

On their way back, the boats were fired on when passing a large village called Havre-de-Grace, which determined the Admiral that he should make that his next place of attack. The marines embarked ay midnight on 2 May, and after a pull of six miles arrived at the battery defending the town, which mounted six guns and immediately opened fire on the boats. The marines pushed for the shore and landed, whereupon the Americans deserted their battery and retreated. A nearby canon foundry was then advanced upon and destroyed, with five twenty-four pounders mounted for its protection, and thirty other guns ready for use or in progress of construction. Another division of boats, meanwhile, destroyed five vessels and large stores of flour up the Susquehanna. During these operations private property was respected, unless the owners offered resistance, and all supplies required by the British were paid for at full value.’

In addition to the specific clasp action on this medals, during its service on this station, the Marlborough’s crew and especially the Royal Marines were involved in a great number of raiding actions and battles during the Chesapeake campaign:

During their service in North America, Marlborough’s Marines were under the command of Captains Marmaduke Wybourn, who’s diary letters and journal has been published as ‘Sea Soldier’, thus some of the actions that Marlborough’s marines were involved in can be traced.

Wybourn talks of some of these actions as great successes; others like Craney Island, were badly planned, with disastrous results, the British suffering well over 200 casualties! However these reverses were very much swept under the carpet!

This clasp occurs with three varieties of engraved date, ‘29 April’, ‘Ap & May’, and ‘April & May’. 57 clasps were issued (all variations). Of these 21 medals are known, including examples in the National Maritime Museum (4), and the Patiala Collection (Sheesh Mahal Museum, India). Due to the nature of their employment; soldiers on land and sea, medals to Royal Marines are particularly good for this clasp. This is because the Marines of were heavy involved in a great number of other non clasp raiding actions and battles up the Cheseapeake. Just 3 Marines from HMS Marlborough received the clasp. One of these is not recorded as extent, another is in the Sheesh Mahal museum, leaving Handall’s the only known outside a museum. 6 Royal Marines from other ships received the clasp.

Regarding the naming on the medal:

The Naval General Service Roll for this clasp shows names as Royal Marine Private ‘Samuel Handoll’, the medal itself ‘Joseph Handall’, note variance of forename and minor variance in surname; ‘O’/’A’. Muster rolls for HMS Marlborough confirm forename as ‘Samuel’ but surname ‘Handall’; as on medal. So we have Samuel Handall’s medal, that the forename has been incorrectly impressed and the surname correct.

Several factors make it clear this is the medal issued to the Marine on HMS Marlborough. Firstly, the surname is unique to the entire medal roll, there isn’t even a similar surname. Secondly, this medal has been known named as it is and with this clasp since sold in the Whalley Collection in 1877, so not that long after it was issued. Thirdly the musters confirm a marine named Handall on HMS Marlborough, spelling on the medal the same as the musters.

When applications were made for the Naval General Service roll, the musters were checked to confirm presence aboard ship and it must be assumed that between checking this and the medal being impressed, his forename has been incorrectly noted down. Naming and rank errors are not uncommon on Naval General Service medals.