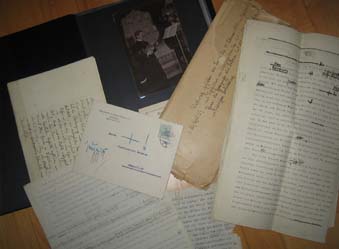 GROUP OF PHOTOS AND DOCUMENTS BEING THE PROPERTY OF A PRE WAR GERMAN OFFICER MAJOR HERMANN NEUMANN, WHO WAS AN EARLY BALLOON AVIATOR AND INSTRUCTOR.

1) 35 Photos, most of balloons and competing teams at the International balloon-race at Bruxelles on September 15th, 1907. There are also some which are of early WW1 ‘drachen’ types, a couple of very early Wright Brothers type aircraft and 3 large and quite remarkable photos of Neumann himself. Neumann looks quite the stereotypical German Officer of the time with a huge upturned moustache, hunting rifles and swords!

2) Regarding the International balloon-race at Bruxelles on September 15th, 1907, a couple of large type written letters with notes by Lt Neumaan, a passenger on one of the German balloons, describing the event and journey of his balloon during the race.

5) Document relating to aerial photography in 1908

6) Large type written manuscript by Neumann (26 A3+ pages) with many additional handwritten notes, which seem to be a history military balloon aerial photography from the 1850’s until 1908

Some really good’ period’ photos – very reminiscent of ‘those magnificent men in their flying machines’. Since there are clearly early WW1 photos and given the dates of some of the documents, it has to be assumed Neumann served in WW1 also.

Photos placed in modern album but not stuck down .Please ask for more photos.