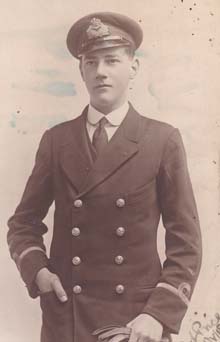 Photo is named ‘Price’ looks like the initials are ‘A J’ and has the date 16th May 1918. Strictly speaking this officer should be wearing a Royal Air force uniform from April 1918. However many personnel previously in the RFC or RNAS did hang onto their uniforms as long as possible, especially those in the RNAS.

Photo of postcard type with a little creasing and a touch of bluish staining. However the latter hardly effects the observer image. Scarce photo of RNAS Observer wearing the ‘O’ wings.