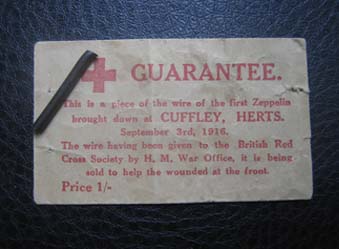 A small envelope with a red printed guarantee reading;

Very attractive piece in excellent condition. Signs of thread etc from being removed from tunic.

‘This is a piece of wire of the first Zeppelin brought down at Cuffley’, Herts. The wire having been given to the British Red Cross Society is being sold to help the wounded at the front’.

With a short 2.8 cm section of wire enclosed.