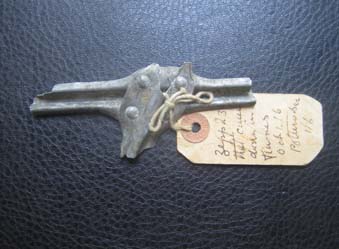 A 10 cm section of Zeppelin framework with a lovely old display label reads.

In the early hours of the 1st October 1916 Zeppelin L-31 was part of a major raid of 11 airships on London. On hearing 11 airships were heading for London pilot Wulstan Joseph Tempest of the 39th Home Guard Squadron had ignored orders to patrol the Thames and had instead taken his tiny biplane to a high altitude in hope of crossing their path. His luck was in.

Reporter Michael MacDonagh described the last moments of the zeppelin as a ‘a gigantic pyramid of flames, red and orange, like a ruined star falling slowly to earth.’ The Zeppelin limped away but only as far as Potters Bar. It eventually came down over Oakmere Park. The entire crew were killed including commander Lieutenant Heinrich Mathy, the record holder for the highest number of Zeppelin raids over Britain during the First World War. Mathy is the only example of a Captain choosing to jump out an airship prior to crashing, and also the only person to have momentarily survived the landing. Local farmers found Mathys still wrapped in his leather flying jacket, face up in the field near the burning wreckage. He only lived for a few minutes.

Pilot Wulstan Joseph Tempest received a DSO for his actions.