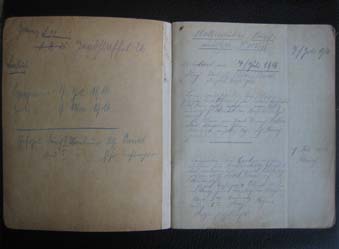 AN OUTSTANDING AND IMPORTANT LOGBOOK KEPT BY HERMAN GOERING’S PERSONAL MECHANICS, WITH MANY NOTES AND SIGNATURES BY GOERING HIMSELF, DETAILING HIS FLIGHTS, COMBATS AND REPAIRS TO HIS HALBERSTADT DII’, DIII’S AND ALBATROS DIII FROM THE START OF HIS SERVICE AS A FIGHTER PILOT KEK’S STENAY, JAMETZ, METZ, JASTA’S 5 AND 26 BETWEEN JULY 1916 UNTIL MAY 1917

This black linen cover booklet with chequered pages, filled in, basically like a logbook, filled in a kept by Hermann Goering’s two senior mechanics; Uffz Pernal and Eufinger, who it seems maintained all his aircraft throughout the period. The logbook itself records the flights, details of battle damage and maintenance on Goering’s aircraft between July 7th 1916 to May 9th 1917. Bar a handful of days, every day during this period of this approx 300 day period has an entry, though of course not all are flight days, with some days with ‘no flying’ and others with maintenance or personnel movement details. The start is significant in that it records the period that Goering became a dedicated fighter pilot, flying Halberstadt DII 115/16 with Kek Stenay, recording his first victory as a fighter pilot on 30th July.

The logbook has a total of 36 pages, with both sides fully filled (72 sides in total) and the last entry is the last page of the book. The layout of each page is that the right margin gives the date and location of each flight or work on the aircraft, the left hand details the flight itself, damage to aircraft, repairs etc. Some of the entries are very brief and there are quite a few entries per page. Others are far longer with just two or three entries. Although filled in by Goering’s mechanics, this logbook belonged to Goering. He had to make sure it was correct and up to date and consequently there are a great addition many notations in Goering’s distinctive handwriting and a large number of his signatures signing off entries. The whole makes fascinating reading as such books rarely survive. When compared to known and recorded, flights, movements and victories of Goering, anomalies can be seen, gaps filled in and details read about that would not have been noted in Goering’s own fight logbooks. It also seems like Goering’s aircraft was lent out a small number of times as entries are signed off by future Ace’s Loerzer on 10th and 23rd September 1916 and Kirmaier on 24th and 26th September.

Regarding Goering’s aircraft and units during the logbooks period. During July 1916, he flies Halberstadt DII 115/16 with Kek’s Stenay, Jametz and Kek Metz, gaining his 3rd Aerial Victory (1st as a fighter pilot) on 30th July. In August, he then flies briefly from Jametz, thought the majority of the month is Stenay. On 6th September he moves back to Kek Metz and starts flying a new aircraft, serial number DIII 392/16 until 19th October when he joins Jasta 5, where he flew DII 108/16 and DII 119/16. On 2nd November, Goering was wounded and his mechanics were it seems sent back to Kek Metz, now renamed Jasta 17. Here they are assigned to looking after Halberstadt D115/16 again, with not a great deal happening over the next two months (or at least noted) and an average of 8 entries a page over 7 page sides. However on 17th February the mechanics are transferred to Jasta 26 and on the 18th, the whole page is taken up with a notation and signature by Goering announcing he’s now back and has joined Jasta 26!

Goering is allocated a new Albatros DIII 2049 from Park B and details of flights etc pick up again with a lot of details being given on many. On 22nd April Goering notes he claims a Bristol, though this claim was not authorised. However the next day he claims an FE, which is. On 28th April Goering notes the claim of a Sopwith, the 29th a Nieuport, both of which are authorised as his 5th Victory, making him an Ace and his 6th. The logbook ends on the last page whith the entry for a flight on the 9th May 1917, this being signed off by Goering. The following day he would score his 7th official victory, this no doubt noted in a similar book.

A quite superb and incredibly rare logbook which not only details the flights and combats of a highly decorated ace and later infamous head of the Luftwaffe, but provides a unique insight into the less documented side of the preparation before and repairs after combat flights of a WW1 fighter aircraft over a 10 month period. Goring's own numerous additional notations show this to be far beyond the mere acceptance of the book and show how seriously he performed this task.